All Vici Gaming fans can celebrate today as they are able to stop the formidable team from South East Asia TNC Predator after a grueling 2nd game, they we’re able to turn the tides of the match and earn them a 2-0 victory and advance to the Grand Finals of MDL Chengdu Major.

TNC Predator who came from Group A stood a clean record before they faced today  in the Semi-finals the Chinese team Vici Gaming with the same standing as their own group in the early phase of the tournament. Game 1 was a complete slaughter-fest after Vici Gaming run an exceedingly dominating performance very early on in the match. Vici’s pick on their players we’re all their comfort and signature and as a result at past 11:00 minute timestamp in game, they we’re ahead atleast 8k gold in Networth against the Earth Shaker – Morph strat of TNC. Kpii the Offlaner and March with Lich did all unorthodox strategies of pulling the creep waves at very deep areas of the opponent’s base even if it meant their death as long as they are able to squeeze every little bit of space so that the key heroes can earn farm. But it never worked, after Vici Gaming slained Roshan and claimed the Aegis, next thing is they we’re knocking on TNC’s highground. Vici Gaming wiped every hero of TNC and with such high tower-damage they we’re able to destroy the fountain 28 minutes in.

The 2nd game was a much more intense match as TNC was able to make it very interesting. They we’re able to make their draft work and have a better start. The pace of the game was into more their liking here being able to run over the squishy heroes of Vici Gaming throughout early to mid-game until the next step for them is to invade highground. Tower pushes turned into trades between the 2 teams with their split-pushing capabilities and Eurus’ Faceless Void with the strong ability of Chronosphere to engage the opponents by force in the team fights. Later on as the game progressed, Void became unbearable for TNC as the hero became almost impossible to kill with Omniknight and the rest of the team behind his back. After an incredible hold in TNC’s highground offense, they marched out mid and became the aggressors. Straight to the fountain they went and hastily as it tore was down before TNC was able to answer back to the push. 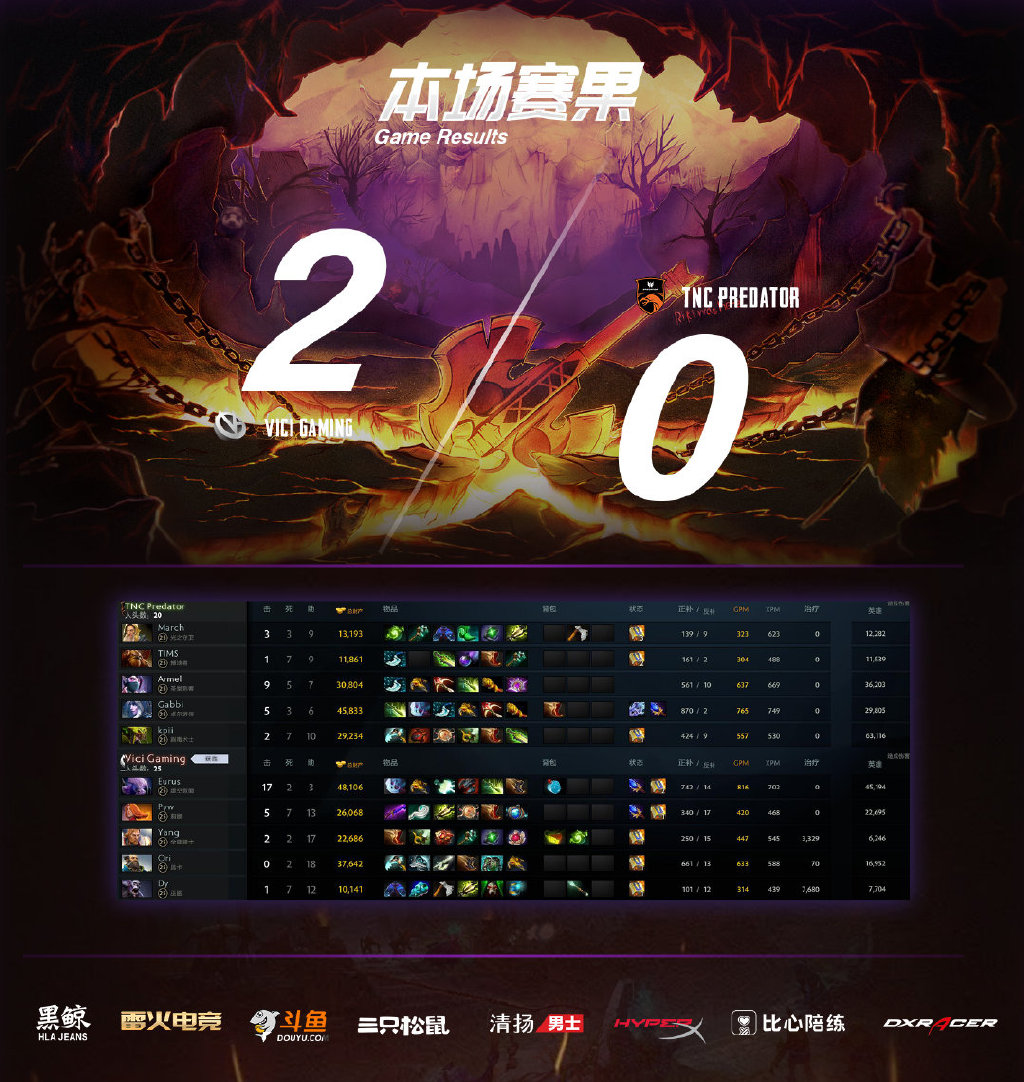 Vici Gaming is now the first Grand Finalist of the tournament while TNC Predator isn’t just out yet as they are dropped down in the Lower Brackets. A rematch is still possible if they are able to take down their next opponents, the winner of EG/IG. Or it could be totally a different team who are deserving to stand against Vici Gaming in the Grand Finals.