What a great time to be alive for SouthEast Asian Dota enthuasiasts and more so for the keen TNC Predator fans as they have overwhelmed J.Storm today in the Upper Brackets schedule of the MDL Chengdu Major. 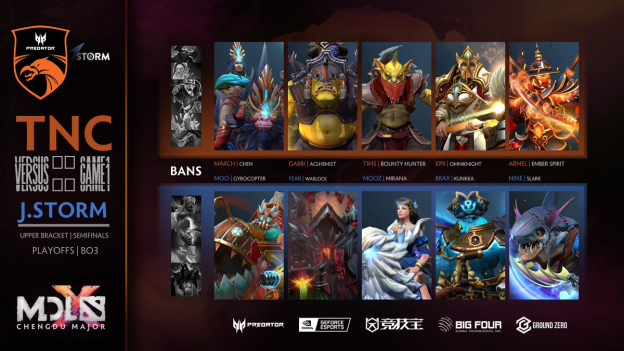 Game 1 lasted for over an hour. J.Storm started out with the bans of common playstyle TNC are used into picking in the tournament such as an Earth Shaker + Morph combo, Magnus into a Core hero and also Gabbi’s trendy Night Stalker. TNC Predator first picked a March Chen, Tims Bounty Hunter, Kpii Omniknight, Gabbi Alchemist, and Armel Ember Spirit while J.Storm had Fear Warlock, Mirana MoOz, Brax Kunkka, Nine Slark, and Moo Gyrocopter. Lane wise, TNC started with dominance and up until the mid-game they had an edge control in the pace of the game but in the highground defense is where they it started to get sloppy for TNC. They we’re able to chip down towers slowly but it cost them time and also with the risk of giving J.Storm an opportunity to make space and farm. It wasn’t the cleanest game for TNC but they we’re able to make their opponents tap out specially with the Alchemist being so far ahead and Armel with his high level Ember Spirit.

Game 2 was also turned out to be a disorganized match for TNC Predator even though they managed to win this one a little quicker with 46 minutes of game time. But if they played it a little less aggressive and clinical in the executions, they could’ve taken the victory in better fashion. It started out with the same bans for J.Storm with TNC’s signature and strongest heroes but still they keep showing out with versatile picks as it was Armel Lina, Gabbi Naga Siren, Tims Disruptor, March Undying, and Kpii Venomancer while for J. Storm, we have Fear KOTL, Moo Leshrac, Brax Axe, Nine Chaos Knight, and Mooz Shadow Shaman. Gabbi’s Naga Siren was one of the main foundation of this match with his very tanky hero, J.Storm couldn’t easily a way to dispose him and his illusions in clashes. Meanwhile Chaos Knight as a hero clearly shows how ineffective it is on this meta with easy AoE abilities to clear out his illusions and a very easy way to capture and disable him. This was too much pressure for J.Storm to handle as they also tap out GG to the South East Asians. 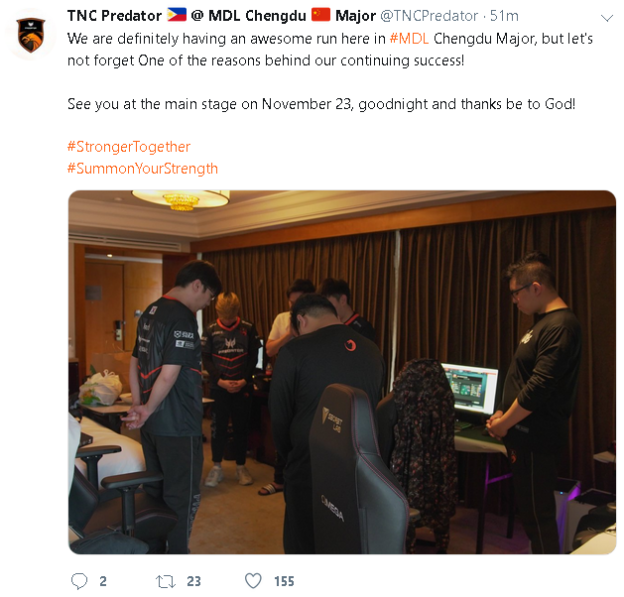 With this victory, they are the first team to secure Top 3 in the tournament with a guaranteed total of 2,100 Dota Pro Circuit Points as they advance into the Semi Finals. They will return in the Mainstage in November 23 with Vici Gaming as their next opponent.