The Chengdu Hunters needs a new head coach. Wang “Rui” Xingrui has resigned from the team due to health issues.

Rui coached the Hunters in their Overwatch League debut, guiding the team to a middle-of-the-pack 12th place. Before signing with the Hunters, Rui coached the Shanghai Dragons in the league’s inaugural season, but left the team mid-season because of his health. 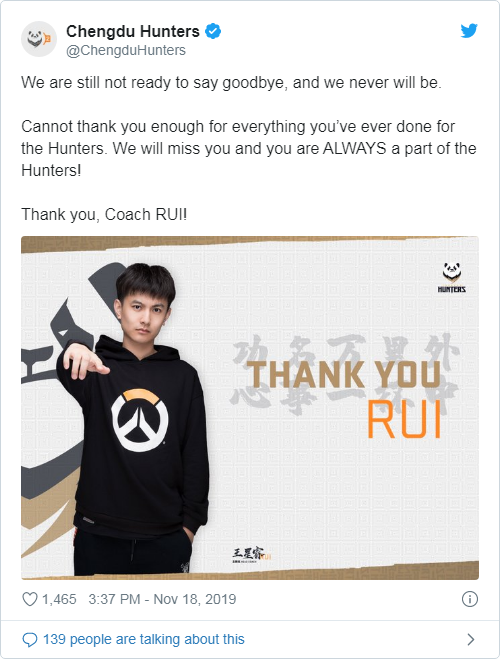 Rui also occupied the post of head coach for Team China in the Overwatch World Cups in 2018 and 2019. He led the team to second place on both occasions, where they were defeated by Team South Korea and Team United States, respectively, two behemoths in the Overwatch competitive scene.

His health started deteriorating during the final stage of the 2019 season, but he stayed with the team to guide them through the new two-damage, two-tank, two-support meta after the introduction of role lock, according to an unofficial translation from his Weibo post. After a physically demanding World Cup run, however, Rui decided to focus on his health.

The Overwatch League’s 2020 season will introduce regular global travel. Teams will host homestand games in their hometowns, and long-distance traveling—and the financial and physical toll it could take on players and teams—will play an important role for teams throughout the season. Rui also cited regular traveling as another obstacle to his permanence in the Overwatch League because of its effect on his health, according to the translation.

Rui’s departure marks the Chengdu Hunters’ first personnel change in the offseason. The team hasn’t announced any significant changes to its coaching staff or player roster, since most of its 2019 contracts are still valid for the league’s next season.