Kim “MekO” Tae-hong will play the Overwatch League’s 2020 season in black and green. The off-tank signed with the Houston Outlaws, the team announced yesterday evening.

MekO comes from a two-season stint with the New York Excelsior, who have drifted in the league’s upper echelons since their inception. In the wake of Sigma’s release, he added the hero to his tank pool, which also includes D.Va and Zarya. The player was listed as a free agent on the Overwatch League’s website and his departure from the Excelsior in October was expected. 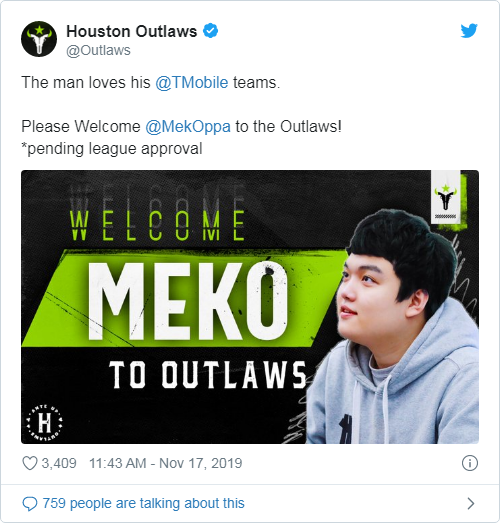 The Outlaws finished the league’s 2019 season at the bottom of the standngs after a largely unfavorable meta and chose to replace part of its coaching staff for next year. Head coach Kim “TaiRong” Tae-yeong and assistant coach Kim “Hyunwoo” Hyun-woo were released from the team. Former Vancouver Titans’ Harsha Bandi signed on to lead the team shortly after.

MekO is one of a few big name pickups for the Outlaws in the offseason. The team also signed João Pedro “Hydration” Goes Telles, one of the Los Angeles Gladiators’ star players, and retained most of their talent from the league’s inaugural season. Veteran cowboys Jake “Jake” Lyon, Jiri “Linkzr” Masalin, Austin “Muma” Wilmot, and Shane “Rawkus” Flaherty still have valid contracts from the previous season, and will shore up the team’s ranks in 2020.

The Houston Outlaws was recently purchased by the Beasley Media Group after Immortals Gaming Group, owners of the Los Angeles Valiant, was forced to sell the team. Overwatch League rules prohibit an institution for owning more than one franchise.