After four days of insane matches, Invictus Gaming prevailed Dota Summit 11 as they defeated Chaos EC 2-0 in the semis, and a clean sweep in a Bo5 Grand Finals to secure the final slot at the Chengdu Major last November 10. 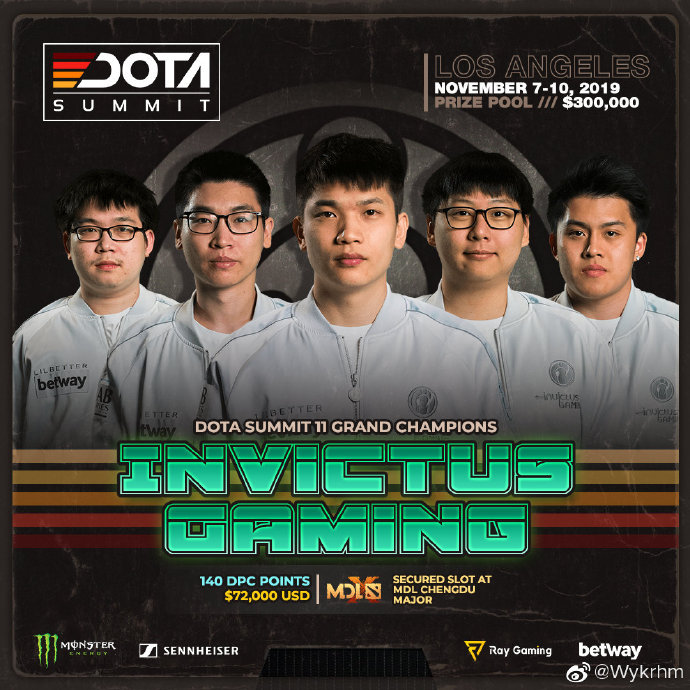 The safe lane trilane from both teams faced early on the bot lane, with IG getting the upper-hand. Shortly after, IG applied more pressure in the mid as they group up as five with Moonlight Shadow, rewarding them with a five-for-two trade.

Despite a close team score, IG continued to choke Chaos in fights as they get another teamwipe. In an attempt to return to the game, Chaos tried to go for Rosh, but a clean arrow from Kaka to Yawar allowed IG to burst him down for a five-for-nothing trade and secure Aegis for Emo. Chaos EC tried to defend, but the teamfight of IG was too much, forcing them to tap out at 24 minutes.

At 14 minutes, both teams already secured seven kills each as Quinn and Emo rotated to the side lanes to get themselves some exp and take down towers. A 15-minute Drums and Diffu gave Slark some easy pick-offs and Aegis, but Emo’s Tiny does the work as he takes Chaos one by one.

Looking like a bad fight for them, IG managed to secure a four-for-one trade after a four-man Avalanche and RP combo. Tiny and AM even chased Slark up to their throne, but a buyback from Rubick forced them to retreat. A triple kill from an Empowered AM with Abyssal, Manta, Vlads, and Skadi gave IG another teamwipe as Chaos calls gg at 34 minutes.

In the early game, Chaos’ supports picked up easy kills on mid and bot. However, Kaka killed Radiant’s courier, delaying Yawar’s Armlet. IG now took the offense and secured kills with multi-hero stuns from JT and Kaka. After IG’s sod breaks, a three-hero Carapace stun from Kaka gave IG a great three-for-one trade, but in the next fight, Chaos gets their own three-for-nothing trade after Quinn baited JT and Flyfly to the rest of Chaos.

With Emo and Flyfly nearing six slots by 35 minutes, IG just continued to force fights without anybody dying. As IG dives Chaos in their T3, three buybacks were used immediately that allowed Chaos to turn the fight around and get Emo, Flyfly, and Oli. In 41 minutes, IG wipes Chaos with no more buybacks on Quinn, Yawar, and Saberlight, giving IG the title of Grand Champions.

With their 3-0 victory, IG bags $72K USD, 140 DPC points and most importantly, the final slot at the Chengdu Major later this month. Meanwhile, Chaos will bring home $60K USD and 120 DPC points.

After dominating the groups and upper-bracket, IG proved how great their teamplay and draft execution is. Also, a special mention for Kaka is worth noting as his Mirana and Nyx helped IG secure some key kills throughout the Grand Finals.

In the end, IG was the better team, but what do you think of the performance of the other teams? How will the Chinese fare on the first Major? Share your thoughts in the comments and stay tuned for more!