The Los Angeles Gladiators have signed free agent Kim “Birdring” Ji-hyuk, previously a star DPS for the London Spitfire. With this acquisition, the Gladiators are putting forth a terrifying roster for the 2020 Overwatch League season.

Birdring played for the London Spitfire for two years of the Overwatch League, lending his skills to the team during their 2018 championship run. While he was relegated to off-tanks during most of the 2019 Overwatch League season due to the triple-triple meta, his DPS skills are still legendary. Before signing with the London Spitfire in 2017, Birding played for Cloud9 Kongdoo. 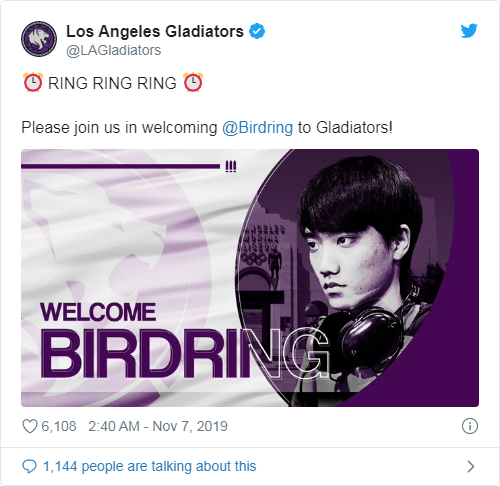 Earlier in the offseason, the London Spitfire released Birdring and a few of his teammates. Birding has now become the first officially announced DPS player of the revamped Los Angeles Gladiators. They recently acquired off-tank Indy “SPACE” Halpern from the Los Angeles Valiant and main tank Son “OGE” Min-seok from the Dallas Fuel. The team has opted to retain their Finnish support duo, Jonas “Shaz” Suovaara and Benjamin “BigGoose” Isohanni.

The Gladiators now have to focus on damage dealers, though, since all of their previous DPS players have moved on to other teams. Lane “Surefour” Roberts was transferred to the Toronto Defiant and Jang “Decay” Gui-un was traded to the Dallas Fuel for OGE. Birdring likely isn’t the last big-name acquisition for the Los Angeles Gladiators, but time is running out. All Overwatch League teams must present a roster of at least eight players by Nov. 15.

In 2020, the Los Angeles Gladiators will host two homestands for fans in the LA area.