INTZ have announced that they have secured the services of former MIBR and Luminosity player Ricardo "boltz" Prass.

The 22-year-old will step into the shoes of Lucas "DeStiNy" Bullo, who is back in Brazil after approximately ten months with the team, having been signed at the beginning of the year together with Gustavo "yel" Knittel.

During his time with INTZ, DeStiNy helped the team to reach their first-ever Major, in Berlin, after they came through the Minor Play-In Stage. The Brazilians would be one of the first two teams to exit the showpiece competition after suffering defeats to Vitality, Grayhound and North in the New Challengers Stage. In a Twitter post, he wrote that he is currently "taking care of personal matters". It is believed that his persistent US visa issues, which saw him miss the group stage matches of ESL Pro League Americas Season 9 Americas, were one of the main factors behind his removal.

boltz, who had been on the lookout for a new challenge since the disbandment of the ex-Luminosity roster, will make his debut for INTZ later tonight, in an ESEA MDL match against Riot Squad. His first LAN with the team will be DreamHack Open Atlanta, scheduled for November 15-17.

With this move, INTZ now have: 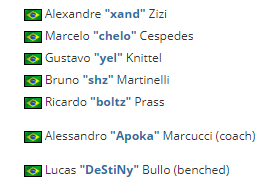