From November 7-10, the first Minor of this DPC Season will kick off in Los Angeles as eight teams will fight for a slot in the MDL Chengdu Major. In a few days, we will witness a whole tournament of exciting matches as they have announced the groups and schedule. (https://twitter.com/BeyondTheSummit/status/1191436761198522370?s=19) For Group A’s opening matches, we will have a battle of the veterans as China representative Invictus Gaming battle it out against Brazilian team Pain Gaming. Meanwhile, the revamped Ninjas in Pyjamas captained by PPD will face CIS replacement, jfshfh178 after Virtus Pro withdrew from the tournament. Which team will be strong enough for top seed? Can 178 keep up and pull off upsets?

On the other hand, the second CIS representative, Hell Raisers will face Quincy Crew who will now be playing under the banner of Chaos EC. Following the match is the return of the Greek Gods, Ad Finem as they go against SEA team Geek Fam. Can the Ad Finem prove they are worthy of the top seed? Can the brand new Chaos EC create enough chaos to send other teams home? 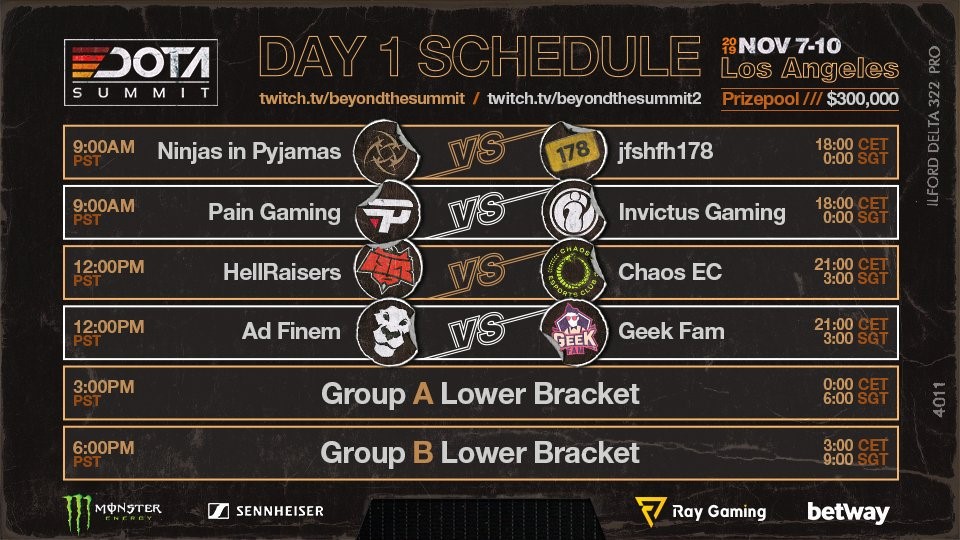 As the tournament draws near, Beyond the Summit announced the following schedules for the matches. The group stage will follow a GSL format, with each series being a Bo3 and the top 2 teams of each group will proceed to the Playoffs, while the bottom four will be eliminated .

For the winner, they will secure a slot at the Chengdu Major later this month as well as $72K USD and 140 DPC points; the second place bags $60K and 120 points; third with $54K and 110 points; and the fourth place will get $42K and 90 points. For the fifth and sixth place, they will be each getting $24K and 60 points, while the seventh and eighth place goes home with $12K and 40 points.

Which team will be eliminated first? Who will take the spot for Chengdu Major? Share your thoughts in the comments and stay tuned for more!