Save, is now an official player of Virtus Pro

Save- is now an official player of Virtus Pro

Virtus Pro has been one of the top competitors in Dota, not just in their home region CIS but known as one of the fierceful Tier 1 team out there. However after The International 9, the long time squad which included RAMZES666 and RodjER had concluded.

It was the time that they begun recruiting on-trial players that led them to epileptick1d and Save- to fill the missing players. Although they didn’t have quite the success, failing to qualify in the First major of the season Chengdu Major but qualifying in 2 minors Dota Summit 11 and ESL Hamburg.

The team decided to skip Dota Summit 11 and give ESL Hamburg a go. But the team underperformed, ended up in 5th - 6th place after being dropped by Alliance. Although they didn’t had the best run, Virtus Pro General Manager, Roman Dvoryankin, said “ «Save- performed well this month and deserved a spot in the regular roster. He’s noticeably stepping his game up both in personal skills and communications with teammates bringing a new approach to the team». 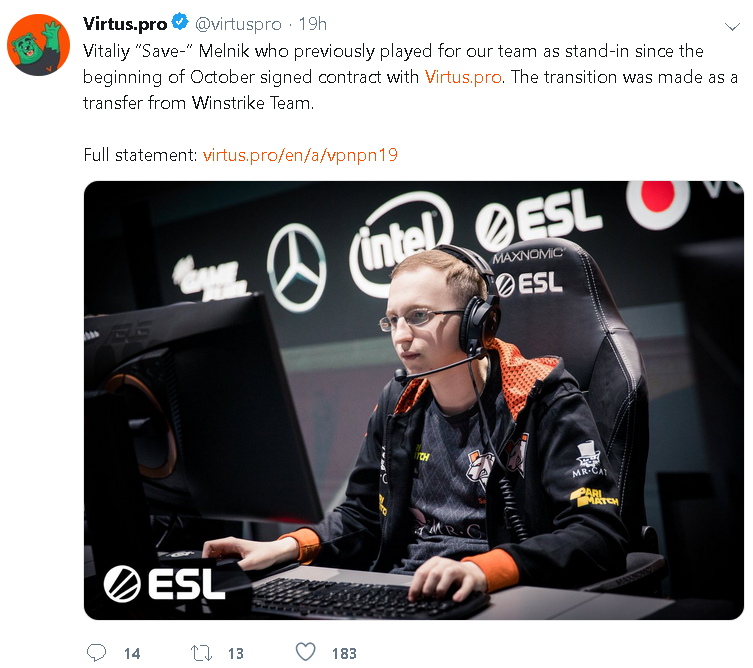 Vitaliy «Save-» Melnik: «I’m glad I managed to meet my teammates’ expectations. I will keep improving my game further, learning new things and doing my best for overall success. Thanks to everyone for believing in me!».

The Major won’t be for another several weeks and still no further announcements about the next event. This means that they will have room to train harder and make improvements in the roster.