With great outplays and insane team coordination, TNC dominated their group and secured an upper bracket spot in the ESL One Hamburg playoffs. From there, they continued their momentum and defeated Alliance and Gambit both 2-0 to get the grand final spot. However, Gambit managed to return to the Grand Finals where they were able to bring it to five games, but TNC held strong to become the first SEA team to win an ESL championship. 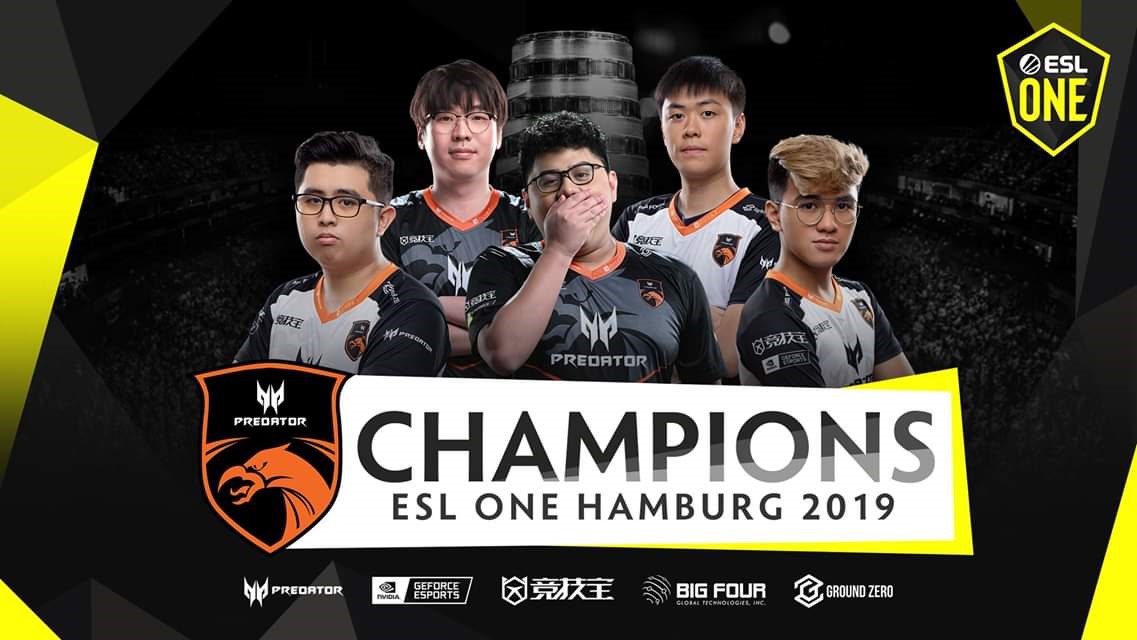 After fighting near their own shrine, Gambit loses a 3 for 1 trade as Gabbi just runs at them even when Shachlo Omniknight casted Guardian Angel to help TNC secure top T3. Despite contention from Gambit TNC claims Aegis as Tims Enigma catches Omniknight and XSvamp1re Rubick of Gambit in a Black Hole to secure a 4-0 as they proceed to hit the Throne with their own army of creeps to win game 1 at 22 minutes.

In game 2, Shachlo Batrider and XSvamp1re Earthshaker put pressure on TNC’s mid and bot as they pick up kills with a simple Fissure block and Firefly combo. Gambit took advantage of a 5v4 game as Gabbi Slark secures farm, so they picked up kills with FNG Grimstroke’s Soul Bind into double Flaming Lasso from Batrider and by 35 minutes, they get a 3 for nothing trade and force March KoTL and Gabbi to buyback as Gambit pushes mid T3.

After a fake back from Gambit, Earthshaker reinitiates with a two-man Echo Slam with Slark and Kpii Ogre to give gpk Ember Spirit a triple kill to easily secure megas. After another double Lasso, TNC taps out and Gambit evens the series after 41 minutes.

Gambit opened game 3 with their gpk Leshrac securing kills around the map, but TNC quickly turned things around as Armel Templar Assassin gets Blink and Desolator at 15 minutes. Despite Gambit clearing all T2 towers, Gabbi Naga secures Manta, Diffu, Skadi, Butterfly, Travel, and Scythe of Vyse at 35 minutes to quickly take down Gambit’s mana-dependent lineup.

A four-man Will-o-Wisp from March KoTL allowed Armel and Gabbi take Gambit down and force XSvamp1re Earthshaker, Dream Juggernaut and Fng Lich to buyback, but the 12-1-15 TA of TNC was too strong for Gambit as they call gg at 44 minutes to give TNC the 2-1 lead.

In game 4, Fng Winter Wyvern helped Gambit secured kills all over the map as they look for a quick pushes as 5 and attempt Rosh, but TNC zones them well enough and forced buybacks on Shachlo Kunkka and Fng, but Dream Lifestealer is strong enough to stand in the middle of the fight as he takes down TNC with only Phase Boots, Manta, and Radiance at 23 minutes.

At 16-7 team score in favor of Gambit, they smoked as 5 and kill Gabbi Nightstalker and March Undying to safely secure Aegis for Lifestealer as they push high ground and even when Tims Enigma caught Gambit’s backline, Dream is already ripping TNC’s cores. Gambit and gpk Lina proceeds to fountain farms TNC to get an Ultra Kill and bring the series to a winner-take-all game 5 at 45 minutes.

With Gabbi Bristleback, TNC created chaos at top lane to help Armel Alchemist secure Radiance, Blink, and BKB at 15 minutes where they attempt to take down all T2 towers of Gambit as Armel and Gabbi confidently dive Gambit inside their high ground. 23 minutes in, Alche already has Heart and Cuirass as they secure barracks with the help of March Undying and Kpii Abaddon to keep TNC alive and despite Soul Bind + Chain Frost from Fng and XSvamp1re, TNC is just tanky enough.

As Gabbi zones Gambit away from their own racks, Armel continues to secure megas at 28 minutes and after a sequence of fights, Gambit realizes how tanky TNC is and finally calls gg at 29 minutes to give TNC the ESL One Hamburg Championship.

With their victory, TNC takes home $125K USD while their new captain, March is voted as the Most Valuable Player of the tournament, giving him a brand new Mercedes Benz.

In an interview with ESL, March expressed his gratitude and pride for his new team as he credited each of his teammates strengths in the tournament.

Will this new iteration of TNC makes much more noise this season? Share your thoughts in the comments and stay tuned for more!