The Paris Eternal are saying bonjour to a new coach. Kim “NineK” Beom-hoon, former assistant coach for the San Francisco Shock, will be joining the Eternal for the 2020 season. Paris haven’t specified whether he’ll serve as the team’s head coach or assistant coach. The change comes at a time when the Eternal are making massive changes to their management staff.

NineK was brought on as an assistant coach for the San Francisco Shock midway through the first season of the Overwatch League. Previously, he was a coach for NRG Esports, the Shock’s Overwatch Contenders academy team. NineK was a key part of San Francisco’s remarkable second season that ended in a league championship win at the 2019 grand finals. 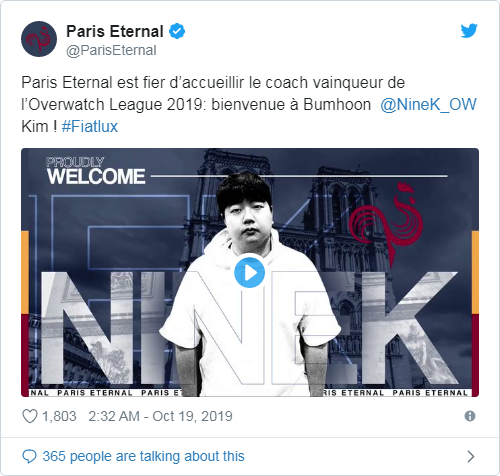 NineK’s signing is a surprise given the Paris Eternal’s history. The expansion team was built before the second season of the Overwatch League and they prided themselves on only using European talent. Every player and nearly every staff member had a history within the European Overwatch scene—the Eternal were meant to be an example of talent within the region.

With a 14th-place finish and 11-17 record during the 2019 season, the Paris Eternal are obviously seeking talent from other areas around the world. No player trades or drops have been announced by Paris during the offseason.