Someone get this man a cowboy hat. The Houston Outlaws have signed Harsha Bandi, former assistant coach of the Vancouver Titans, to be their new head coach. The Houston native will head home when the Overwatch League goes global for the 2020 season. 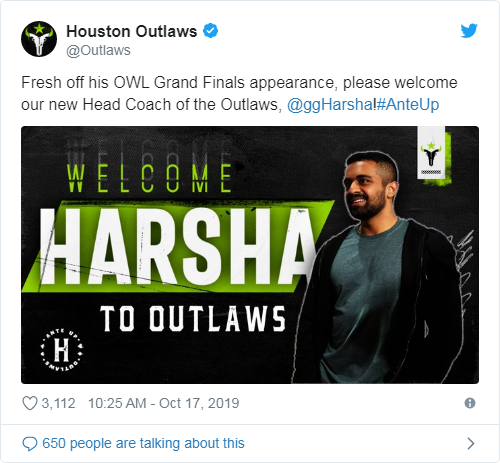 “I will do my best to achieve strong results this season and am happy to have such a talented team alongside me,” Harsha said on Twitter. The Houston Outlaws recently released head coach Kim “TaiRong” Tae-yeong and assistant coach Kim “Hyunwoo” Hyun-woo after two seasons with the team. In the 2019 season, the Outlaws finished 16th with a 9-19 record.

Harsha has an undeniable résumé of experience on two championship teams, but the future of the Houston Outlaws is still in question. The team’s ownership organization, Infinite Esports & Entertainment, was acquired by Immortals Gaming Club (IGC) earlier this year.

IGC also owns the Los Angeles Valiant. Due to Overwatch League regulations, one organization can’t own two teams, so the Houston Outlaws have been looking for a buyer. Real estate investor Lee Zieben was on deck to purchase the team for $40 million, but the deal has reportedly stalled. Despite these issues, the Houston Outlaws will be hosting two homestands during the 2020 season.