Virtus.pro went through a brutal shuffle post TI9 and found themselves with just a three man line-up at the roster lock deadline. Nonetheless, they’ve decided to give a chance to two up-and-coming players and entered the regional qualifiers for the MDL Chengdu Major with Egor “epileptick1d” Grigorenko and Vitalie “Save-” Melnic on a trial basis.

Starting with this Dota Pro Circuit season, the Major and Minor qualifiers got merged into one shorter single event, and those who didn’t make it top two into the Major qualifiers group stage had the chance to fight for a Minor slot. In the CIS region, Virtus.pro were one of the teams that didn’t make it to the Major, but emerged victorious in the battle for one of the two CIS tickets to the DOTA Summit 11 Minor.  Earlier today it was announced by Beyond the Summit that VP won’t, in fact, be able to attend the Minor due to visa issues. The way BTS phrased it on Twitter had the VP General Manager, Roman Dvoryankin react and show his disappointment with how things were handled. In their official statement, VP talk about the pressure a DPC tournament can bring to the new players and emphasize the idea that it’s more important for them to build, but they also confirm that visa issues are also real for some of their players.

“Minor qualifiers have revealed our roster’s potential. However, we need time to fully reach it, and additional pressure can only get in the way. Furthermore, problems with Visas were an additional factor, as missing the tournament due to ambiguous timings of our application reviews was a real possibility,” said mister Roman Dvoryankin. 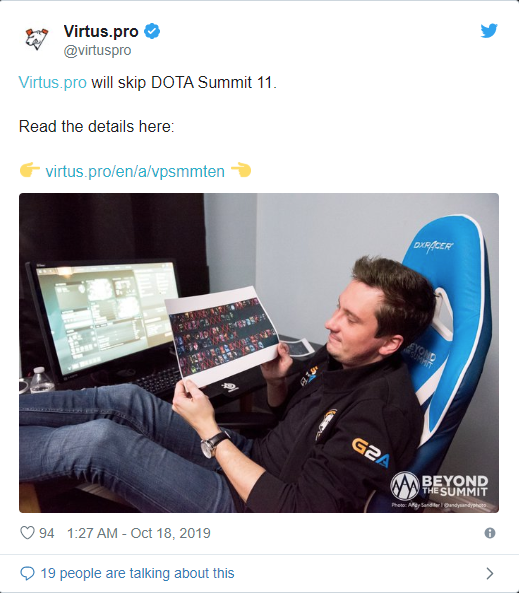 Virtus.pro would have come to the DOTA Summit event as three time champions of BTS Summits, which is an achievement in itself, but for the new line-up it would have added extra pressure.

While Beyond the Summit will try now to bring to the tournament fshfh178, the third placed team in the CIS qualifiers, Virtus.pro reconfirmed their participation at ESL One Hamburg, which is set to begin in the Barclaycard Arena on October 25.

下一篇：Quincy Crew round out the ESL One Hamburg 2019 lineup