It’s time to get spooky. Overwatch‘s annual Halloween event is live with eight new skins, multiple weekly challenges, and the return of a fan favorite game mode. The event runs from Oct. 15 to Nov. 4.

Every year, Overwatch hosts a Halloween event in which many heroes get to dress up as the spookiest versions of themselves. Heroes that were released after last year’s Halloween event, like Ashe and Baptiste, have earned costumes for themselves. Widowmaker, Junkrat, and Orisa have also had a scary makeover. 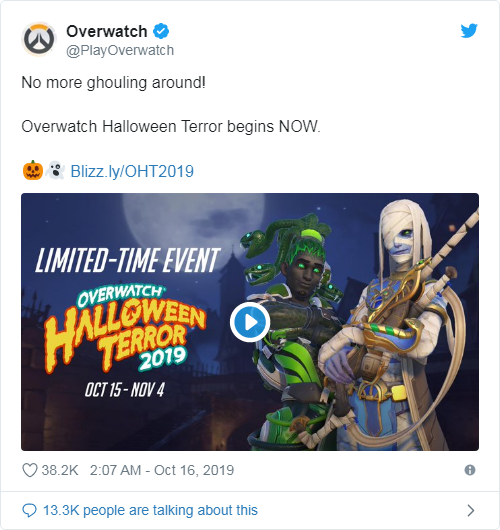 The weekly challenge function has also been incorporated into this year’s event. Three weekly challenges will be held during the event. A rare skin can be unlocked with the completion of each weekly challenge, which asks players to win nine games of Overwatch in quick play, competitive, or arcade modes.

Junkenstein’s Revenge is also returning for another year. In this PVE mode, four players team up to fight an onslaught of robots and difficult enemies while defending a castle door. Players can tackle the mode at various levels of difficulty, earning unique character sprays as they go.

During the three weeks of the event, players can also unlock or earn new player icons, character voice lines, and highlight intros. The Overwatch Halloween event runs from Oct. 15 to Nov. 4.