Following SumaiL’s departure from the squad only weeks ago of experimenting in the roster, despite being able to qualify in the first Minor of the season Dota Summit 11, they we’re down one Offlane player. 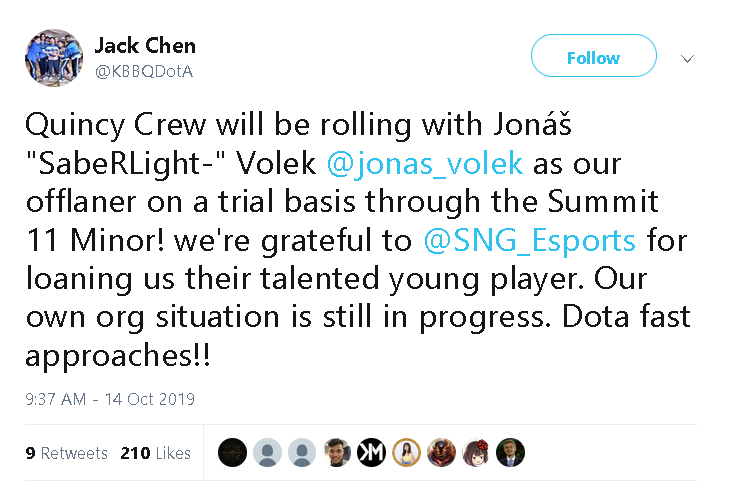 “Quincy Crew will be rolling with Jonáš “SabeRLight-” Volek as our offlaner on a trial basis through the Summit 11 Minor. We’re grateful to @SNG_Esports for loaning us their talented young player. Our own org situation is still in progress. Dota fast approaches.”

SabeRLight- is expected to temporarily fill the gap the old roster had with SumaiL- which they had adjusted moving into different positions. SumaiL had to go one up as Carry, YawaR which is a mainly Mid Player wen’t into Offlane and CCnC maintaining his Mid status. But it didn’t led them to have conflicts playing a convenient game. He is an experienced and steady Offlane which is exactly what Quincy Crew needs fast with only weeks left to prepare for the tournament.

Dota Summit 11 will feature prominent teams such as Virtus Pro, Ninjas in Pyjamas, Invictus Gaming and more. The Minor starts Nov. 7 and the champion will take home $72,000, 140 Dota Pro Circuit Points and the last ticket to MDL Chengdu Major.