It was barely a month ago when EternalEnvy tweeted that his smurf account got a 6-months ban for “role stealing” literally every single game he played. Back in late August, the tier-1 pro player received massive backlash for his unethical decision and is indirectly promoting other players to do the same, despite the DOTA2 development team’s best efforts to balance and make matchmaking experience a much more enjoyable experience.

Unfortunately, even after the recent matchmaking update Valve released days ago, EE still continued his normal routine of selecting hard support role, only to pick a hard carry or mid. I guess #justEEthings, huh?

EE’s lifehack on getting carry every game: https://clips.twitch.tv/DignifiedOilyRingHeyGuys

Chapter 2: Another One Hits the Bottom.

Just yesterday, EE-sama was just minding his own business, casually streaming for his millions of viewers who just want to watch him play some tier-1 DOTA. But little did he expected, that it would be his last game played (on that account).

Right after the game ended, it went well, with his Huskar plays being impossible to play against, even if he did select hard support role and picked Huskar. Despite winning, EE was surprised with the red glow near his FIND MATCH button, that has a little warning message, saying “You have been banned till 06/04/2020”. That’s right, it’s a 6-months ban!

Now, it might not have come as a shock to most of us who read this since he has a behaviour score of 1 out of 10000 and the massive number of reports for not playing his selected role, may have accumulated enough for this ban. EternalEnvy even tried to show his recent games, revealing that he has been “PMA” in the last 8 games and is on a winning streak. 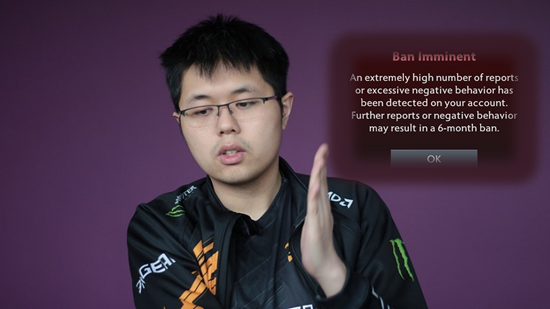 Before we begin raising the pitchforks against the pro player, we still must address the elephant in the room, that is the matchmaking system being worse than the previous. Since the last patch, while most carry players especially Immortal players are spending too long just to find a game, it was still very balanced in other skill bracket to say the least.

However, now, party matchmaking has taken a worsening turn. If you have an Immortal friend in your party, and you are just Ancient skilled, be ready for one hell of a game, because you will still be matched to play against a team of complete Immortal-ranked players. While the DOTA2 dev team claims that this could reduce easy boosting and unbalanced match, you still have to feel pity for that Ancient player that gets targeted by the enemy team as it is easy food. AdmiralBulldog pointed it out in his game.

Immortal-ranked players, who are playing solo, are also constantly being matched with or against Ancient-skilled players too as posted by EE himself in several tweets below.

One thing that is actually causing Valve to constantly change the matchmaking but to become worse each time, is probably thanks to the community. Often times, we don’t see anyone positively praising about the new matchmaking system. But instead, it’s just those who complains that are getting their voices heard by Valve.

For instance, players complaint about having lower ranked players in the team. Then, when that got fixed with the introduction of Ranked Roles, we complaint about queue times being too long, and the cycle repeats. Now we are back with the issue we had in the first place again, which is that there’s low ranked players in the game as pointed out by DOTA2 talent, Dakota. Chapter 5: Running out of Accounts.

Fortunately for EE, the recent account that got banned was not his main account he uses to play pub games while streaming. But that’s 2 smurf accounts banned for 6 months. Personally, I doubt that the guys over at Valve would even bother unbanning as long as it’s not his main account.

Does EE still have more smurf accounts to sacrifice? Or will he start playing nice similarly to everyone else. Tell us what you think about the ban! Stay tuned.