Every game starts with the early game, and if you can get off to a good start, you set yourself up for success in the mid and late game. But what makes a good early game? The three things to master are proper gold management, unit selection, and positioning. This guide will cover these topics specifically in the first 10-15 rounds of the game.

The most important thing about the early game is how much gold can you accumulate. Gold is particularly impactful in the early game because of the nature of interest. If you have lots of gold early, you will gain more gold in interest at the end of every round, meaning you gain more interest in future rounds. Later in the game, gold is less valuable because you have fewer rounds remaining to collect interest, but in early game, you want as much as possible!

To do this, you should think carefully about what units to buy and when to buy them. The amount of gold that you will gain in interest every round is “locked in” at the start of combat. So if you want to buy a unit that is not an immediate upgrade, consider waiting until combat starts to purchase it, in order to get the most amount of interest. You should also be wary of 3-cost units in the opening few rounds. While they can be strong, they can also drain your economy, as that 3-cost could have been used to gain higher interest.

I will often sell off many units in order to hit interest thresholds. One important benchmark that I try to hit every game is to get to 20 gold on round 8. Sometimes I really want to hold onto pairs of units, and I cannot quite make it, but I will always get to 20 by round 9. From there, I try to increase my savings to hit 50 gold around rounds 12-14. Take a look at this example: 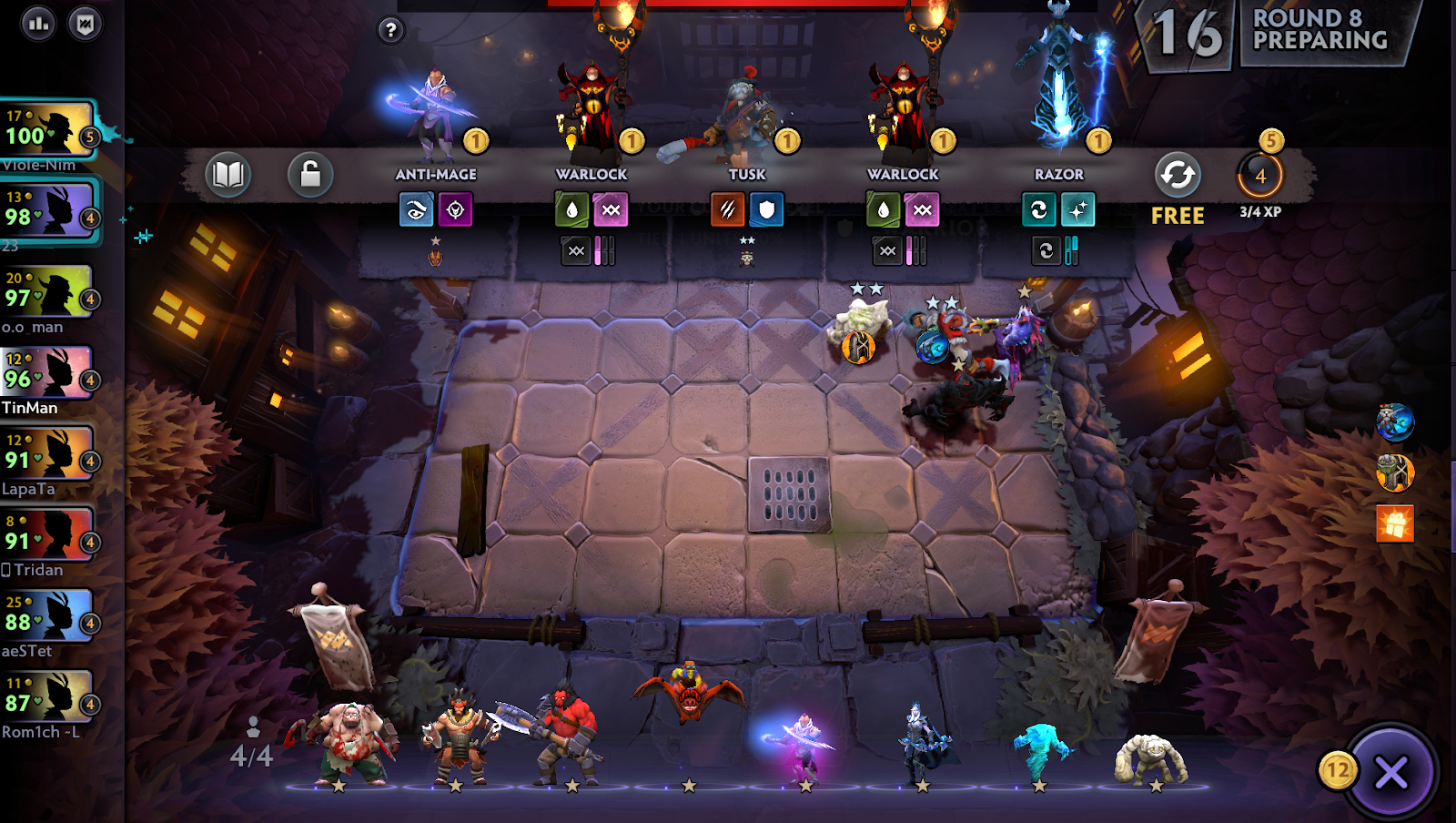 I also often save the free re-rolls that I get from losing a round until I lose again. Once I lose the second round, I will use the re-roll at the end of combat and buy any unit I want quickly before the next round starts, in order to not waste the roll. This may weaken my board, since I am not getting upgrades quite as fast as someone who uses it instantly, but it also lets me bank as much gold as possible, and only buy during combat, in order to maximize interest.

The most important thing for units early on is raw stats: Health, DPS, and armor. Abilities are nice, but they are much less impactful, since fights are longer, and units auto attack each other a lot. There is very little burst damage or quick kills like you see in the late game. This makes ★★ units particularly powerful, as they have essentially double the damage and health as their ★ counterparts. You should play any ★★ units you find in this early game, regardless of Alliances or synergies.

When fights are long, and mostly auto-attacks, healing becomes very effective. The healing from Treant Protector and Enchantress really have time to shine and keep your entire team alive. Health Regen items like Tranquil Boots are not very great later in the game, but can be quite strong in the opening few rounds.

Some units just have naturally high stats and they should be high priorities. Here are some of the outliers that you should aim to fit into any early game build, stats are at ★/★★:

Other than just raw stats, certain Alliances are particularly good, and others particularly bad. The best Alliances early on give fixed amounts of stats, like Warriors gaining Armor, Savages gaining attack damage, Druids gaining star levels, or Bloodbound, giving attack damage. These increase your combat potential dramatically, even when your baseline stats are low.

On the flip side, some Alliances do not help out much because they scale with some percentage of your stats, and if you do not have much, then their percentage will not be as big as flat stat increases. Assassins do not have much damage early on, so getting some crit chance is not that big of an increase, same idea with Elusives and effective health, Hunters and attack damage, and Warlocks with percentage based healing. These Alliances scale better into the late game, when your units are all upgraded, but early on, they are not quite as impactful as raw stats.

Proper positioning in the early game has a lower impact on the fight than proper positioning in the late game. Early game fights are much more often won by simply stronger units, who has the most two star units, or has impactful items and Alliances, rather than positioning. But in close fights, it certainly can make a difference, and if you are trying to get on an early win-streak, you need every edge you can get.

If your build is strong

Place your units into a back corner, far away from the front line. Since movement is somewhat chaotic, your units will move and spread out as they walk into the fight. This will ensure that no opponent will be able to single out one of your units with a focus fire attack, and also protect any ranged units better against Assassins, since melee units may turn and face them as well. 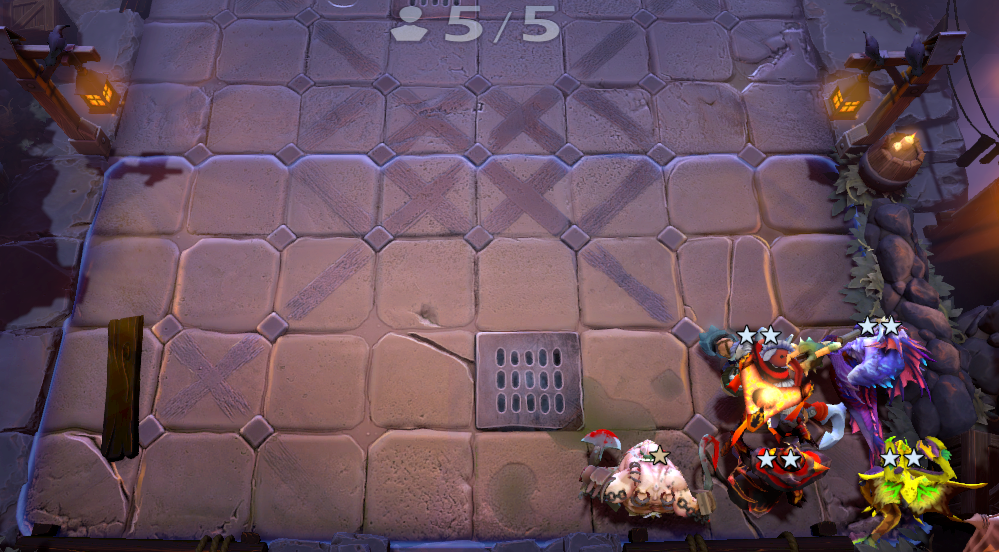 This build is quite strong with many 2-star units and Alliances. By placing our units in this back corner, we protect our ranged units from Assassins, and make sure the opponent’s damage is spread between all of our tanky warriors.

If your build is weak

Place your units offset to one side, with ranged lined up along the edge. This will encourage a focus fire fight. Unless the opponent is lined up directly in front of your units, all of your units will prefer to target the closest enemy target, hopefully eliminating them quickly. You may still lose the fight if you are weak, but hopefully you take one or two of them down with you, so that you take less damage.

Be aware that your opponent will likely focus fire your units as well, so make sure your most resilient unit is closer to the center of the board in this formation.

In this example Pudge is placed closest to the center and all of our damage dealers, Slardar, Drow Ranger, and Windranger will hopefully all target the same opponent. 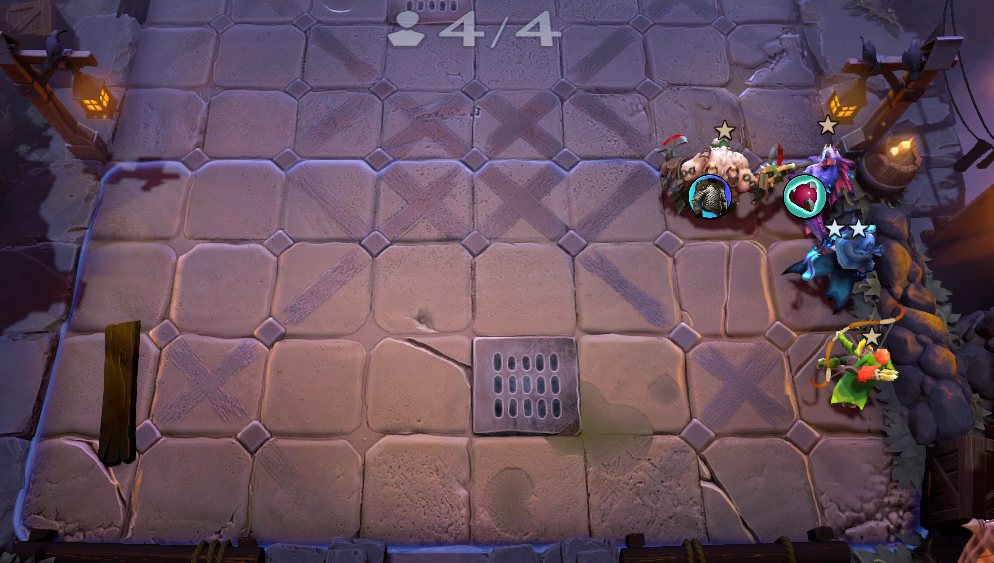 下一篇：Climbing To White Spire With The New Hunters Build