Shortly after Midas Mode 2, beastcoast who competed with a temporary roster immediately disbanded.

They’ve been out in the competitive scene for a while after players started to go in different routes, today they have decided to create a new chapter for the organization by signing ex-Anvorgesa’s roster.

Team Anvorgesa’s players are composed of Hector “K1” Rodriguez, Jean “Chris Luck” Gonzales, Adrian “Wisper” Dobles, Elvis “Scofield” Peña, and Steven “StingeR” Vargas but when given an opportunity, they took the liberty of representing Team Infamous in The International 9. They’ve fought well and ended up in a good spot of 8th place in the prestigious tournament.

“Beastcoast has always been about supporting emerging talent and having fun, and we think this team is the epitome of that approach. Anvorgesa caught my eye at TI9 before they even stepped on to the stage. Their growth as a team over the last DPC season, and their will to win are all things that we as an organization want to promote. This was a natural fit, and we are excited to make waves with them this season!” said by Beastcoast CEO Grant Zinn 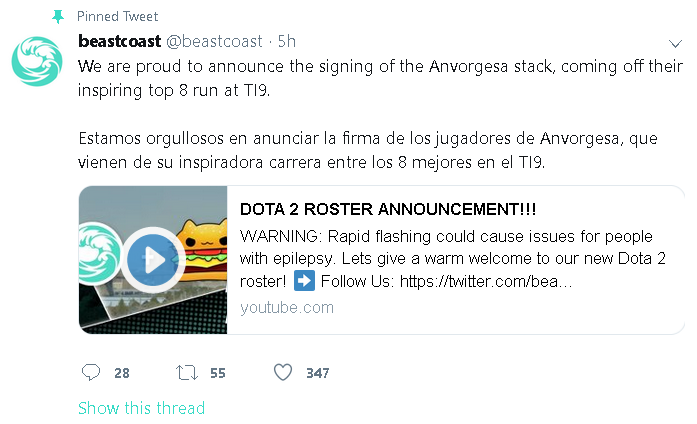 While Beastcoast is orginially an North American team, it is reported that the players will stay and bootcamp in South America.