A few Overwatch heroes will be putting their World of Warcraft costumes on this year. 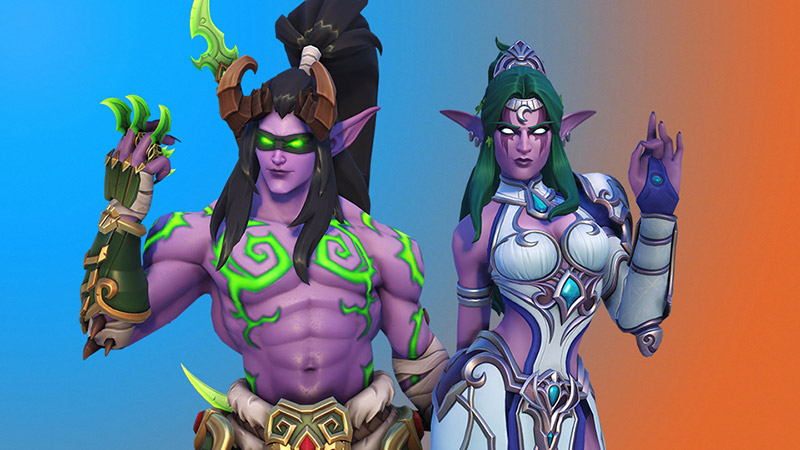 Details about the 2019 BlizzCon Virtual Ticket were released today and two new Overwatch skins are a part of the loot included. Genji and Symmetra will be receiving exclusive skins modeled after key World of Warcraft characters.

The BlizzCon Virtual Ticket allows exclusive at-home access to some of the offerings at BlizzCon, which will be held in Anaheim, California on Nov. 1 and 2. While “more of this year’s main stage content [will be] available to watch live online for free than ever before,” according to Blizzard, the $49.99 ticket allows more freedom for at-home viewing. More importantly, it includes a lot of in-game Blizzard loot.

Genji and Symmetra are the lucky Overwatch heroes to receive skins this year based on World of Warcraft heroes in honor of Warcraft‘s 25th anniversary. Genji’s skin gives him the look of Illidan Stormrage, a night elf who made a few demonic decisions in his lifetime. Symmetra gets the look of Tyrande Whisperwind, a high priestess of the goddess Elune.

The 2019 BlizzCon Virtual Ticket includes loot for every Blizzard game. Hearthstone players will receive a BlizzCon card back and a legendary card to be revealed at the event. Two new pets and a new transmog outfit are available for World of Warcraft players. More loot will be revealed as the event approaches, too.

The virtual ticket costs $49.99 and offers the above loot in addition to in-depth panel coverage, access to feeds of community events, and freedom to create an at-home experience of BlizzCon 2019. Some items, like the Overwatch skins, will be available before BlizzCon begins on Nov. 1.