September 30th, a mini-balance patch has been released by Valve that tweaks several abilities and items from the recent update. 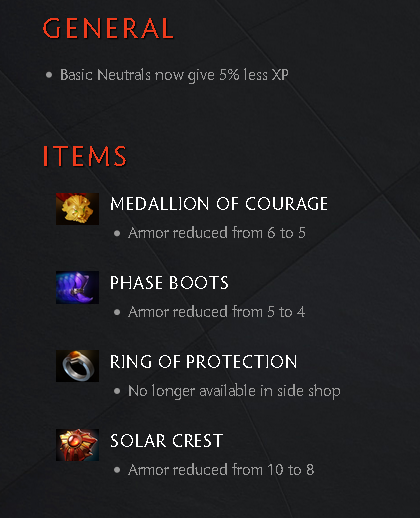 In the general category, Basic Neutrals has been targeted once again by NERFS. 7.22g Gameplay Update involved bounty gained from them reduced by 5% and now this patch equalizes it with now less 5% gained XP.

As for Items, it’s all the same from the recent patch. One of the most picked up item Phase Boots and Medallion of Courage into Solar Crest was nerfed from the armor it applies and Ring of Protection that can be used to build Ring of Basilius or Urn of Shadows will no longer be available in the Side Shop.

And the same case goes for Heroes, not one received a single buff but it’s all tweaks in their abilities or attributes. There’s no certainty but this move may be a preparation for the next big patch that Valve will most likely release any time soon.

Several most pick heroes in pubs lately would be Night Stalker, Kunkka, and Mirana. Their key abilities such as Balanar’s Crippling Fear, Mirana’s Leap Attack speed buff and Sacred Arrow, or Kunkka’s X Marks The Spot and Ultimate won’t be the same. A couple of damage loss, increased cooldowns/less durations will have a big impact in the usage of these Heroes.

What do you think of the update? Tell us in the comments down below and I’ll see you in the next one.