EHOME is one of the pillars of the professional Chinese DOTA 2 scene, the team is known all over the world as one the top-tiered organizations hailing from China.

EHOME has won a good amount of titles, ranging from “Bucharest Major” to “Shanghai DOTA 2 Open” and many more but despite the achievements. EHOME has had hardships in the past with troubling partnerships, close-call wins, and downhill progression.

Although the team has been through a lot, they continue to give out their best performance and skills for their Chinese fan audience and supporters from around the globe.

Changes for a Better Future

EHOME has announced their new roster with Luo “Ferrari_430” and Yang “NeverEnd” Pu taking their leave.

As a result, Tang “897” Zhirui will replace Ferrari as Midlane Carry and Cheng “vtFaded” Jia Hao will replace Neverend as Carry.

The positioning for the new team has also been announced. 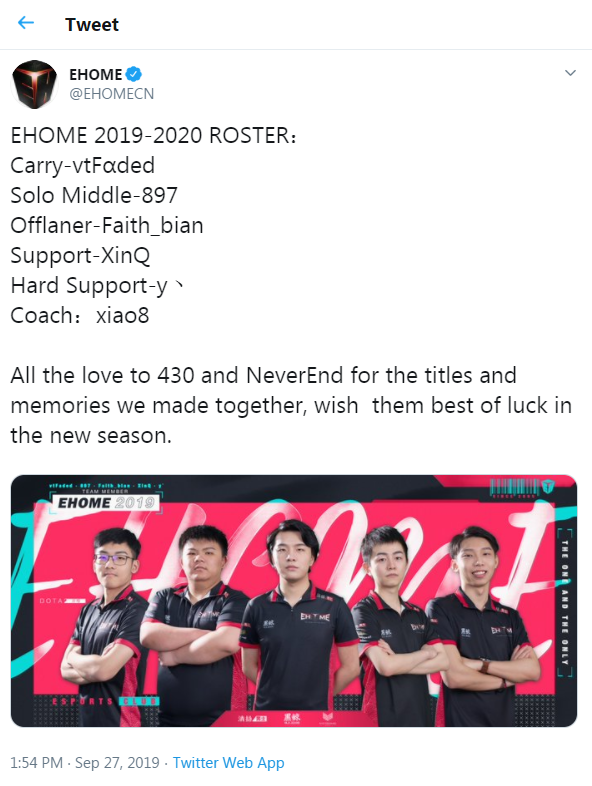 With a lot of professional gaming organizations making big changes, it’s only natural that other teams like EHOME would too. Adaptation and adjusting to match or at least rival other teams is what the whole professional scene is all about.

EHOME made the best possible decision for their roster. Despite having little time left, they pulled through. EHOME is officially ready to start the DPC season with their newly-made team.

How well do you think EHOME will do in the upcoming DPC Tournaments?