The long-awaited new Ranked Season has finally arrived, just in time for the weekends. However, maybe it isn’t the best time to calibrate your MMR. If you hadn’t realized how the medal works, every new season, the medal’s value to MMR is lower than what you have just days ago.

That’s because when a new season begins, the player pool of players who already calibrated their MMR is still very little, causing the system to label your 4,000 MMR as a Legend medal. Unlike a few days ago, that amount of MMR is equivalent to an Ancient medal. However, over time, even if you don’t play and your MMR remained constant, you will suddenly realize that your medal upgraded to something better since the average player skill drops over the season. 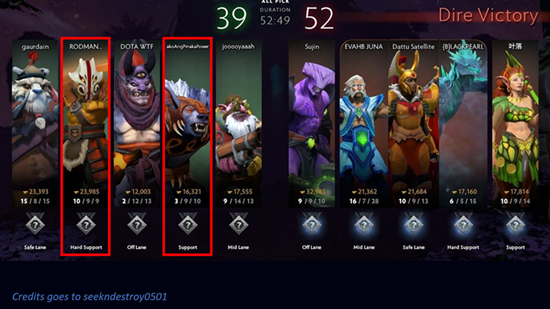 If you think DOTA2 has just gotten a huge upgrade recently and you think that you can have a nice game with positive players across the game, then think again. It seems like the boosters and smurfs are back to ruin your DOTA2 matchmaking experience on the first day itself.

Meanwhile, the toxic players aka “role stealers” are back too! Now featuring Void Hard Support and Legion Commander Hard Support. It just seems despite the DOTA2 development team’s best efforts, it was only a matter of time before these pesky players get back into the matchmaking by simply creating a new account.

Either way, at the very least, most of us in the community had a good laugh at all the salty boosters and toxic players complain on social medias about Valve killing their own player base. Hoping to enjoy a quick game during your weekend afternoon or after work? Well, good luck trying to find a game if you are a pro player in the top 500 rank or 8,000 MMR. Popular streamer, monkeys_forever, was just doing his daily routine of streaming himself playing DOTA2 games but it seems like the DOTA2 client is giving him a sign to not play instead. From the beginning of his stream, he has been searching for a game for a whopping 5 HOURS and to no avail.

Now, you might be wondering, oh, monkeys is probably very toxic and acts like a monkey in-game, right? Well, it doesn’t seem like it as he’s often a very tryhard player who picks offlane. It seems like his viewers also enjoy his stream as he’s a rather PMA (positive mental attitude) guy. 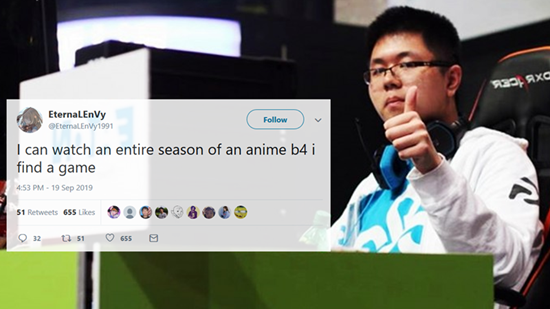 On the other hand, EternalEnvy too is having a tough time trying to find a game, however unlike monkeys_forever, this is probably his own issue for getting reported too many times. Jokes aside, this is unfortunately a widespread issue with top ranked players due to their extremely small player pool. As he posted, he can watch a whole season of an anime before finding a game.

Various players are also facing long queue times, such as SammyBoy. Even Aui_2000 plus Arteezy stack had to queue for more than an hour before finding a game against another 5-main party. Anyways, unless you are an Immortal player in top 300 rank, this would never be of your concern.

Well, you couldn’t be more wrong. It seems like due to small player pool, even a Divine 1 player gets matched in the same team with Immortal ranked players like Mind_Control himself! Imagine the pressure on him to play properly with him!

That said, if you really want to play during this weekends, then by all means, find a 5-man stack to play with instead of solo-queuing. But, that’s not fool-proof either as the 5-man stack of boosters are waiting to meet you in-game too!

Have you tried playing your first calibration games? Tell us what happened! Stay tuned.