DOTA Summit 11 announced as first event of the DPC season

DOTA Summit 11 announced as first event of the DPC season

As the DPC season starts, we can only wait for the upcoming events.

The first event for the season will be the DOTA Summit 11, which was announced a few weeks before the commencement of the qualifiers.

DOTA Summit 11 will be the first minor of the 2019-2020 season and will also be the first occasion where a live studio audience attends a DOTA 2 event ran by Beyond the Summit.

It will also be the first minor that uses the new updated prize pool distribution percentages and DPC pointing system. 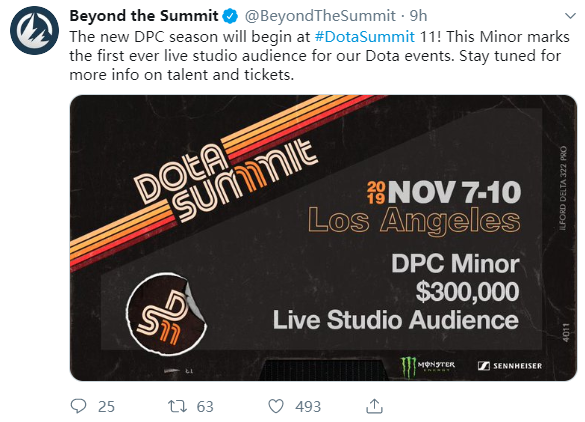 The minor will officially start on November 7, 2019 for a period of 3 days, and will end on November 10.

The Summit will feature a group stage with two groups of four, using a best-of-three format that will have the top two teams from each group advancing into the play-offs.

The four advancing teams will continue to play best-of-three matches matches in a double-elimination bracket until only 2 teams remain.

The last two teams will go head to head at the grand finals and fight a best-of-five match to determine the winner.

The prize pool distribution and DPC pointing table has also been revealed.

The updated DPC guidelines have given lower-tiered teams a fighting chance as you can see in the table above.

Even though the prize and DPC point distribution is not as big as you’d think, it sure helps tier 2-3 teams in the long run when it comes to the eventual International 2020, especially with some professional teams not attending the first minor of the DPC season.

The excitement that comes with knowing that some underdogs may prevail in the first minor, is immense.

As September comes to an end and the qualifiers draw near, we are all waiting in patience for the fun to start.