Before the Outlanders Update, Valve finally released a patch to balance out the heroes that were prominent in TI9 and became the stars of the thousand pubs that followed. Aside from several items and hero updates, let us look into some heroes that got nerfed this patch. (http://www.dota2.com/patches/7.22g) 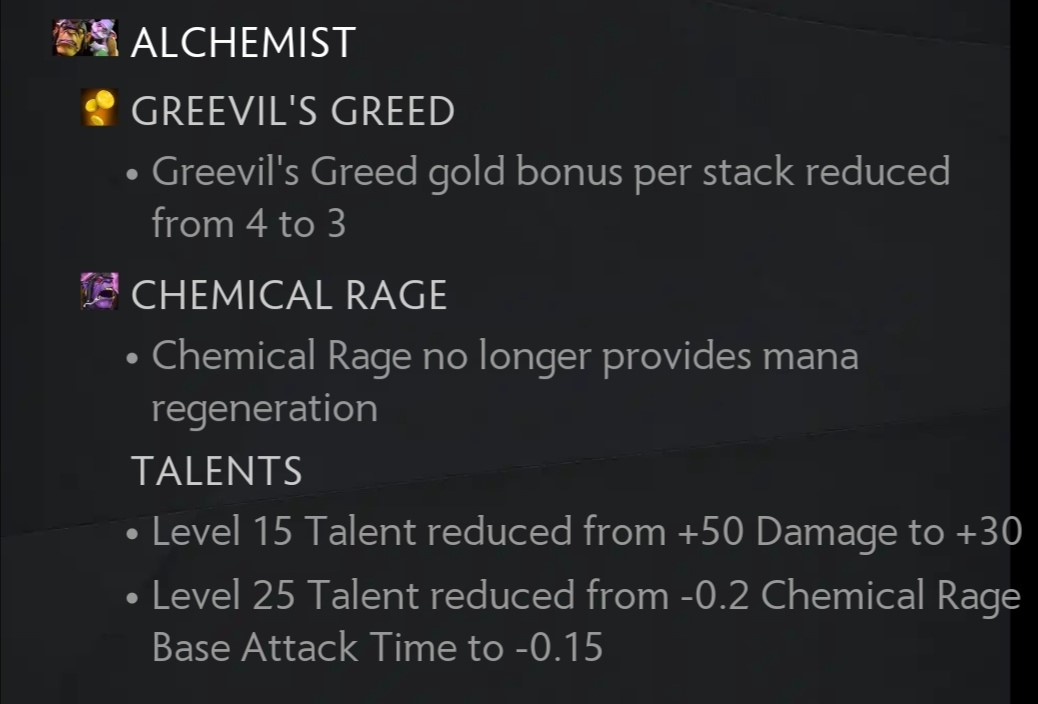 Having 99 bans during TI, Alchemist was one of the heroes that almost guarantees a win when the enemies allow him to farm freely even for just a few minutes. With this update, Alchemist’s farming ability has weakened as the bonus per stack from his passive is reduced. Furthermore, his ult no longer provides mana regen, so this guy can no longer be an unstoppable force he was once. The adjustments made on his talents will also cripple his farming in the early game, allowing the enemy team to keep up even just a bit.

One of the most reliable supports, Chen’s abilities was toned a bit as his Holy Persuasion only allows him 3 creeps at level 1, while his Divine Favor took a beating as the heal amplify and cooldown was nerfed. Because of this, Chen’s ability to push with his creeps and teamfight contribution staggers.

The most feared lane support during TI, Elder Titan receives a massive nerf on his Astral Spirit as the level 1 cooldown is increased from 17 to 23. Aside from that, the movement speed and damage bonus he gains from it can now be dispelled. With this, a simple Eul’s can render an enemy Elder Titan useless during fights.

Sharing the highest ban rate with Alch, Enchantress returns to oblivion as her base damage and Impetus is reduced. In the laning phase, she will also have a harder time as the heal from Nature’s Attendants is reduced for the first levels. In my opinion, they could have also adjusted the effects of Untouchable, but these nerfs will probably do the trick on keeping her away from the pubs. 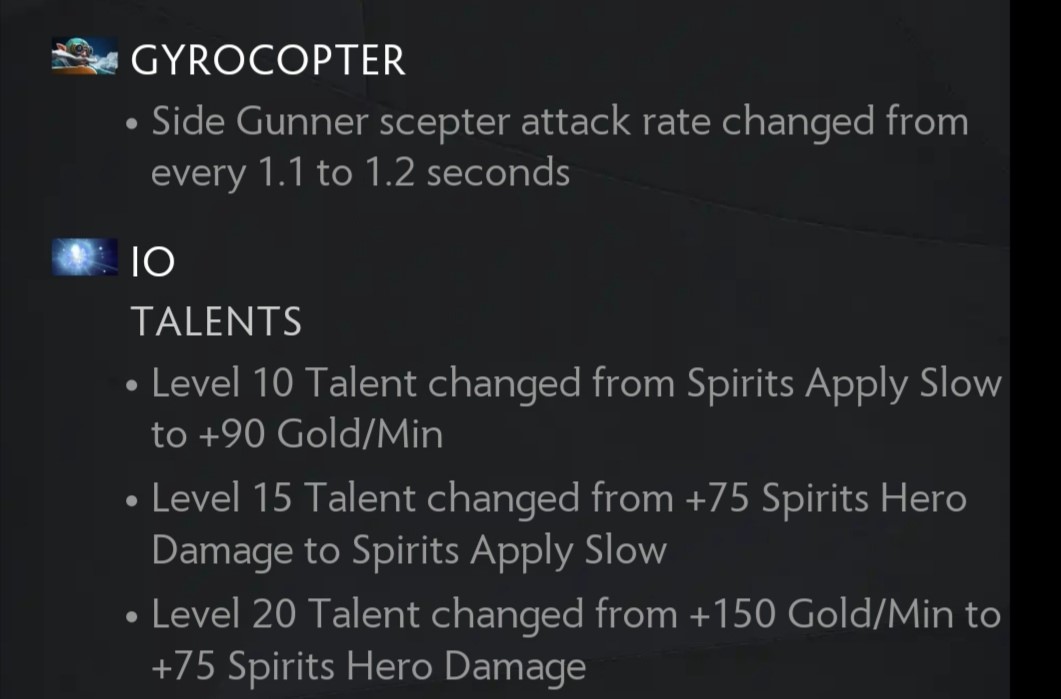 On the last game of the TI9 Finals, OG was being destroyed on the early game, but as soon as Topson Gyro and Ana IO came online, Team Liquid began to crumble. Luckily for Gyrocopter, only a small adjustment on his Aghs Scepter is implemented. On the other hand, OG’s strat of a farming IO till Aghs and level 15 comes to an end as major Talent adjustments are applied. Because of this, IO’s viability as a carry has been greatly reduced because he would need more time and exp before he become a heavy damage dealer even with Aghs as he needs to reach level 20 first. 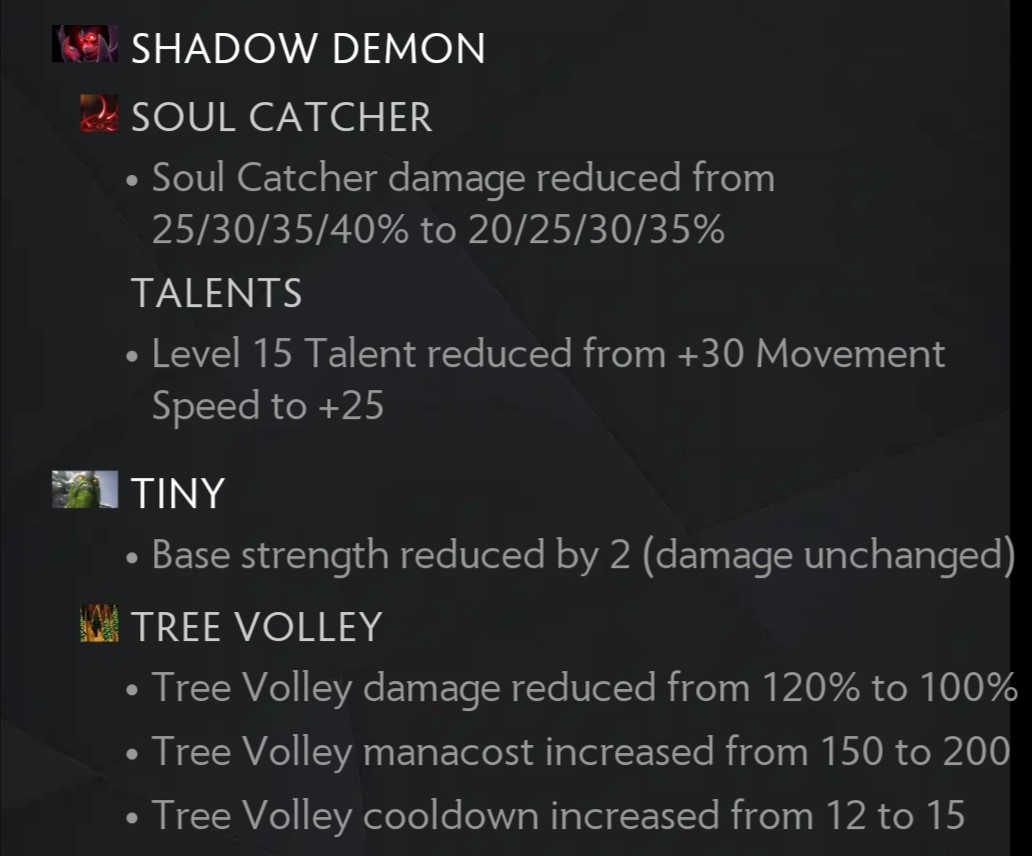 Another prominent support that was one of the most picked in TI9 was Shadow Demon because of his skill that allows his allies to burst a single enemy. However, this patch looks to weaken this ability as the percentage levels on Soul Catcher is adjusted. This now brings Shadow Demon a tier below viable supports.

The last TI9 hero who was hit with the nerf hammer is Tiny whose base strength is reduced by 2, reducing his ability to tank tower damage when ganking in the early game as we have seen pro players tank a lot of damage and escaping because of their early game tankiness. Furtheremore, his Aghs upgrade was also nerfed to the ground as its damage, manacost, and cooldown is adjusted to weaken his killing potential with Tree Volley. With this nerfs, Tiny will have a harder time roaming in the early game as well as slow down his potential to kill squishy heroes in the late game with Tree Volley.

Aside from this TI9 nerfs, Icefrog also made sure that three unpicked heroes during TI- Clockwerk, Keeper of the Light, and Ursa received good buffs that can help them in becoming viable picks in this patch.

Because of this patch, pubs are now bearable than before as the ez mmrs brought by these heroes will not be guaranteed. Before you head on to play, make sure that you check the whole patch notes in-game.

How satisfied are you with these nerfs? Are they enough? Share your thoughts in the comments and stay tuned for more!

下一篇：Craziest Hack in the History of DOTA2?!