The match between OG and Team Liquid was fairly intense at times and as such, we have an in depth analysis of that amazing game four of the grand final which saw OG walk away $15,000,000 richer and with the Aegis of Champions defended. In this article you will find details of draft advantage and every strategy’s success and failure throughout the live game.

This article is written by Jaishil ‘Drifter’ Mistry and if you are interested in more live stats and graphs then visit www.o2esports.com 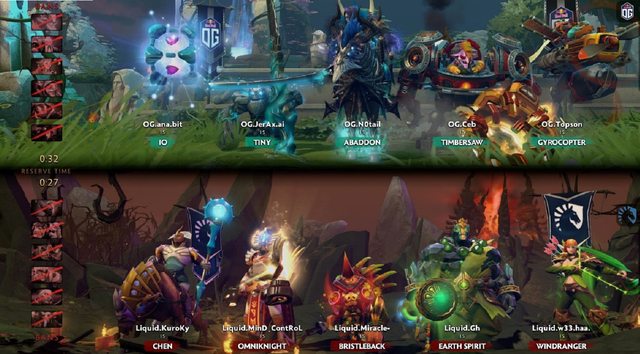 The banning phase started with a surprise as Liquid banned Elder Titan in their first three bans, leaving Ancient Apparition in the pool. Previously AA was always banned in the first phase in all the games played in the grand finals between these two teams before this. In this scenario Liquid could have picked up Ancient Apparition after seeing major healing and HP regen beneficiary heroes on the side of OG. AA’s pick could have significantly improved the team fight advantage for Liquid.

The draft of OG made sense in terms of synergy whereas Liquid’s draft was highly focused on countering OG’s early game aggression. Even though Liquid’s draft was able to provide some sustainability in the beginning, it lacked heavily in all other aspects that we will discuss below. 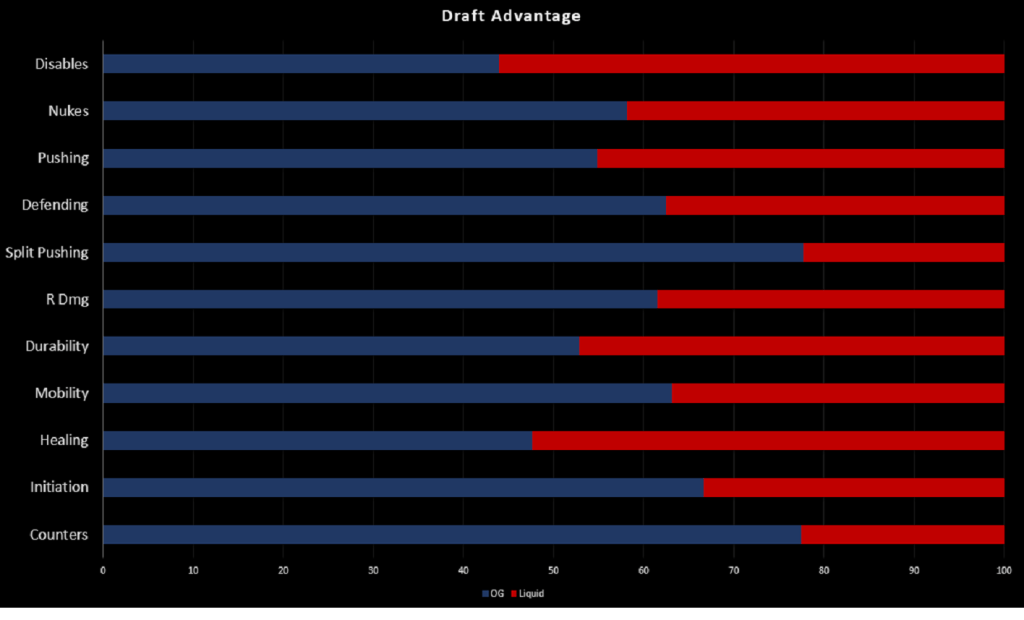 As you can see in the image above, the best 3 advantages for Liquid are Disables, Durability and Healing. But even in that the difference against OG isn’t that high. This is where one can understand that Liquid lost the draft itself. OG had picked better counters, split pushers, initiators, defenders, nukers, right clickers, pushers and mobile heroes. They had the advantage in everything and this is by far, the worst case scenario for any opponent. From the last 2 games OG were quite clearly in form and on top of that they picked a great draft, leaving Liquid in a terrible spot. Even if Liquid had won the first 10 mins through constant aggression, OG had great defense and split pushing heroes to extend the game. 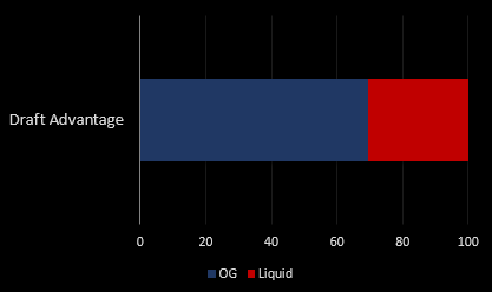 This is the Total Draft Advantage and OG had an advantage of 70% which is extremely high. This was higher than this International’s average of 60% advantage. While considering the current meta formed during the International here is the Hero statistics and ranking table from all heroes played in this tournament from 15th August to 25th August:

After considering a heavy defeat in the draft itself, there’s always a chance of success and that’s when live stats come in.

The image shown above is live analysis of all strategies and advantage according to the abilities, items, talent tree and in-game performance of the heroes during this game. The live stats would be compared during the game time of 5:06, 19:59 and 24:16.

Starting from 05:06, the win chance of the game was almost equal and Liquid was playing extremely well to fight back and reduce OG’s win chance from 70% to 50% – hold about a 1k networth lead at this moment. With good lane control and defense, Liquid started building up momentum and started turning the tides, while also finding kills around the map. They were able to gain this advantage because OG did not have enough lockdown abilities to complete their kills and they became overly aggressive. While Liquid also did not have good disables, their healing was good enough to get counter kills.

Liquid kept on pushing forward and at the 18th minute they secured Roshan and grabbed an Aegis. The lead was still only around the 1k mark but it seemed as though they assumed it was bigger when they to push as five. In the following fight, they suffered a big loss and although their decision was correct, it did not work out in their favour. The reason for this being the correct decision from Liquid was that Gyrocopter and Timbersaw would have out-farmed them quite quickly and easily pushed the lead into OG’s favour, making it even more difficult to push.

The live status at 19:59 suggested that Liquid had a win chance of 55% and this is when they had decided to push for Tier 3 tower. When we see the 2nd graph of Live Advantage, it shows us that the only option for Liquid was to take a team fight. Even though OG was also equal in that strategy, Liquid’s execution showed that they wanted to bait OG outside of their base by using Earth Spirit and then win a 5v5 team fight as they had Aegis. But this strategy failed straight away when Earth Spirit died too quickly and they had to push up into the tier 3 tower to secure the kill of Timbersaw. The most unexpected moment for Liquid was the Blink Dagger of Jesse ‘Jerax’ Vainikka. The blink counter initiation destroyed Liquid’s positioning and killed three heroes within just a few seconds. With the Aegis destroyed and without any kind of synergy Liquid lost the entire fight. While this had already created a huge disadvantage for Liquid, OG capitalised even further by killing off Aliwi ‘w33’ Omar’s Windranger, allowing them to push on to the tier 3 mid tower with ease.

At this moment OG knew Liquid had no big disables or high damage nukes to instantly burst any of their heroes and with their own high healing capacity, the minuscule amount of damage that the TI7 champions could have thrown out would have been brushed off. Hence OG kept on pushing and causing havoc. A little while later, OG would catch Liquid off-guard once again when they used a “fake back” to destroy them.

The live stats of 24:16 shows how Liquid was destroyed in the last team fight and had no option but to surrender.

OG had a great draft and near flawless execution which is how they won the final match of the series and claimed their second International tournament while securing a total prize money of $15 million.

A tip to young drafters and teams out there; the draft always plays a huge role in the game and remembering to counter aggression of your opponents with good lockdown abilities with low cooldown time followed by high nuke damage is a must. Even the best drafters and teams get nervous after losing two games in the manner which Liquid did, but remember to always fight back bravely and chose to play aggressively against opponent’s aggressiveness. Keep on analysing such games to try and find out the strategies that could work for you if you were in their shoes.