After losing to Pain Gaming in the Upper Bracket Finals, Alliance makes a comeback run to sweep Pain Gaming 3-0 in the Bo5 Grand Finals of Dota Summit 10 in Los Angeles, July 28.

In the lower bracket finals, Alliance swept Team Serenity 2-0 to get a rematch on Pain Gaming and here is how it went down.

Game 1 : Alliance with the lockdown party

In the early game, Alliance was dominating their trilane against Thiolicor Magnus, Therence Juggernaut, and Grimstroke. However, a gank from Pain Gaming on Dire’s top shrine sparked a 5v5 teamfight where they were able to secure kills on Qojqva Death Prophet and Dark Willow in exchange of Grimstroke only. With Blink on Boxi Slardar, Alliance pushes Mid T1 and catches Lelis Puck and finish with a 4 for 2 trade in Alliance’s favor.

29 minutes in, Alliance takes the bait of Pain Gaming to have them get Sonic Waved by hfn Queen of Pain, but a BKB from Sven backed by the rest of Alliance gives them a 4-0 wipe. Another 4-0 wipe followed after Pain failed killing Oracle before the rest of Alliance swooped in with multi-man stuns with a Slardar with an Aghanims Scepter.

Winning teamfight after teamfight, Alliance pushes high ground with an Aegis and conquers Pain Gaming’s last stand to have them call GG and win game 1 at 37 minutes with a 20k Networth lead.

After Centaur, DP, and Oracle tried to gank Therence Gyro and Lelis Beastmaster, hfn Outworld Devourer, 444 Spirit Breaker, and Rubick quickly responded to kill Centaur and Oracle without trading anyone. However, Alliance recovered as they managed to take the Aegis off hfn with the help of a Slark with a Double Damage rune and a Centaur with a Blink to secure a 4-2 wipe with only Slark and Oracle dying for Alliance, while 444 barely escapes death near Radiant’s bottom shrine and a dieback from Lelis.

With their gained momentum, Alliance pushes Pain’s mid T2 to take down Gyro and Rubick. After a buyback from Gyro, Qojqva’s DP with Aghs led the front line charge as Boxi lands a three-man Hoof Stomp near Pain’s top T3 to give DP the triple kill and team wipe for Alliance.

Pushing bot T3, Alliance baits hfn’s BKB and went on him once the BKB is done. Dead for 74 seconds without buyback, hfn initiates the GG call to give Alliance the 2-0 lead after 34 minutes.

11 minutes in, Pain has a 2k Networth lead as hfn continues his rotations, but Alliance still catches up as Qojqva Clinkz takes advantage as Pain overextends their ganks. With a five-man rotation from Alliance, the European team takes a 3-0 trade as they commit Black Hole on Axe and chase down CM on Dire’s top T1.

In attempt to kill Sven, Axe, CM, and Riki tried to surround him, but Insania’s Soul Bind on Pain Gaming’s supports gave Micke an ultra kill in the 5-1 tradeoff in their favor. With Blink on Mars and Aghanims on Clinkz, Alliance hunted down Pain to secure another 4-0 wipe as they secure towers behind Sven’s Blink and BKB.

Despite dodging micke’s stun with Rage, Lifestealer still dies after Boxi and Qojqva jumps on him at their mid T3. Before Pain reaches Alliance on top, Sven already jumps on hfn on the high ground, followed by a two-man Black Hole and an Arena of Blood that trapped Pain Gaming and force Leshrac and Lifestealer to buyback and defend.

Boxi tries to catch hfn hiding near Dire’s top t3 and with BKB’s popped, Clinkz free hitting, Alliance takes a 4-0 wipe in their favor as Pain Gaming calls GG after 28 minutes to end the Grand Finals with a 40-15 kill score and 27k Networth lead in favor of Alliance.

With the victory in the last tournament before TI, Alliance has secured $42K first place cash prize to help their fundings in Shanghai while Pain Gaming takes home $24.5K USD as second place. 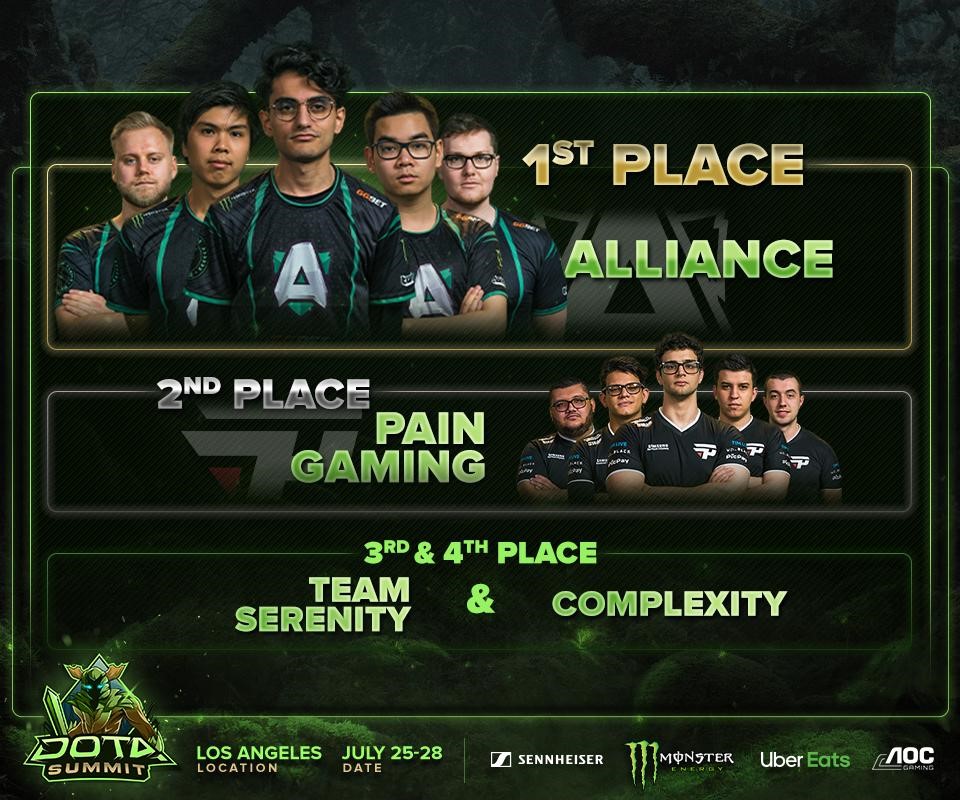 Alliance closes off the DPC season strong, how do you think they would fare in The International? Share your thoughts in the comments and stay tuned for more!