StarLadder has announced the group draw and schedule for the Americas Minor, kicking off on July 17.

The eight contestants, who came through the closed qualifiers that were held in South America and North America, have been drawn into two double-elimination groups for the first stage of the tournament, which will be held in Berlin from July 17-21.

The top two teams of the Americas Minor will secure participation in the Challengers Stage of the StarLadder Major, while the third-placed side will have another chance to qualify via the Minor Play-In, offering three slots in the first stage of the Major.

stanislaw looks to lead his team to the New Challengers stage

Much like its European counterpart, the Americas Minor will see a GSL group stage format, featuring best-of-one opening matches and best-of-three series in all following match-ups. Two teams from each group will advance to the playoffs, which will also feature a double-elimination format.

Below are the groups for the Americas Minor:

The clear favourites of Group A are NRG, who recently debuted their newly-adjusted lineup, featuring Peter "stanislaw" Jarguz, at ESL One Cologne, securing a quarter-final finish at the $300,000 event. Group B is spearheaded by FURIA, the sole remaining Brazilian roster in the top 10 of the world rankings. The team will look to repeat their endeavour from the previous Minor, where they finished in second place to book a spot at the IEM Katowice Major.

The comprehensive schedule for the Americas Minor is the following: 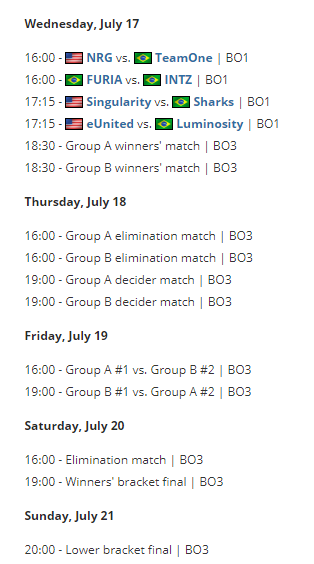