ESEA has announced the broadcast crew for their upcoming Global Challenge event in Dallas, Texas.

ESEA Season 31 Global Challenge will be held on July 13-14 with eight teams in attendance, who will fight it out for the $75,000 prize pool.

The regional finals of Europe and North America will take place a day earlier, on July 12, with Vitality going up against Sprout and FURIA taking on Singularity. The winners will qualify for ESL Pro League Season 10 in their respective divisions.

HenryG will be casting at the Global Challenge

Among the five broadcast members that will bring you the action live from Dallas, Texas is Henry "HenryG" Greer, who will be accompanied by three other commentators and the host, Mark "boq" Wilson.

The full talent lineup for ESEA Season 31 Global Challenge is below: 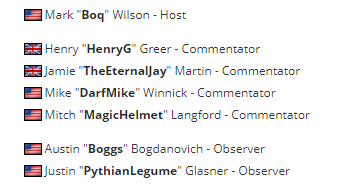