Fans are looking for lore in odd places — including cookbooks

Fans are looking for lore in odd places — including cookbooks

Overwatch sits in an odd place for a game as a service, in that it has a running story attached to the property ... that doesn’t actually take place in the game itself. Instead, Overwatch’s story has been told through cinematics, comics, yearly events, and short stories.

Overwatch also has a large fan base of players who are mostly there for the stories, characters, and world. These fans write fanfiction, draw fan art and comics, and have built communities around shipping, writing, and speculating. It’s no surprise, then, that these fans have started digging to find as many details as they can, no matter how unlikely the source.

Let’s take the official Overwatch cookbook. This collection of recipes is mostly full of fun, delicious distractions, but there are a few pieces of new information hidden in its pages that we didn’t know about characters. Stuff like this seems like a major stretch; surely no one is actually interested in the religious practices of Zenyatta’s order, or Soldier: 76’s childhood? But there are parts of the Overwatch community that will eagerly take details like this and spin it into the web of speculation and head canons they’ve created. 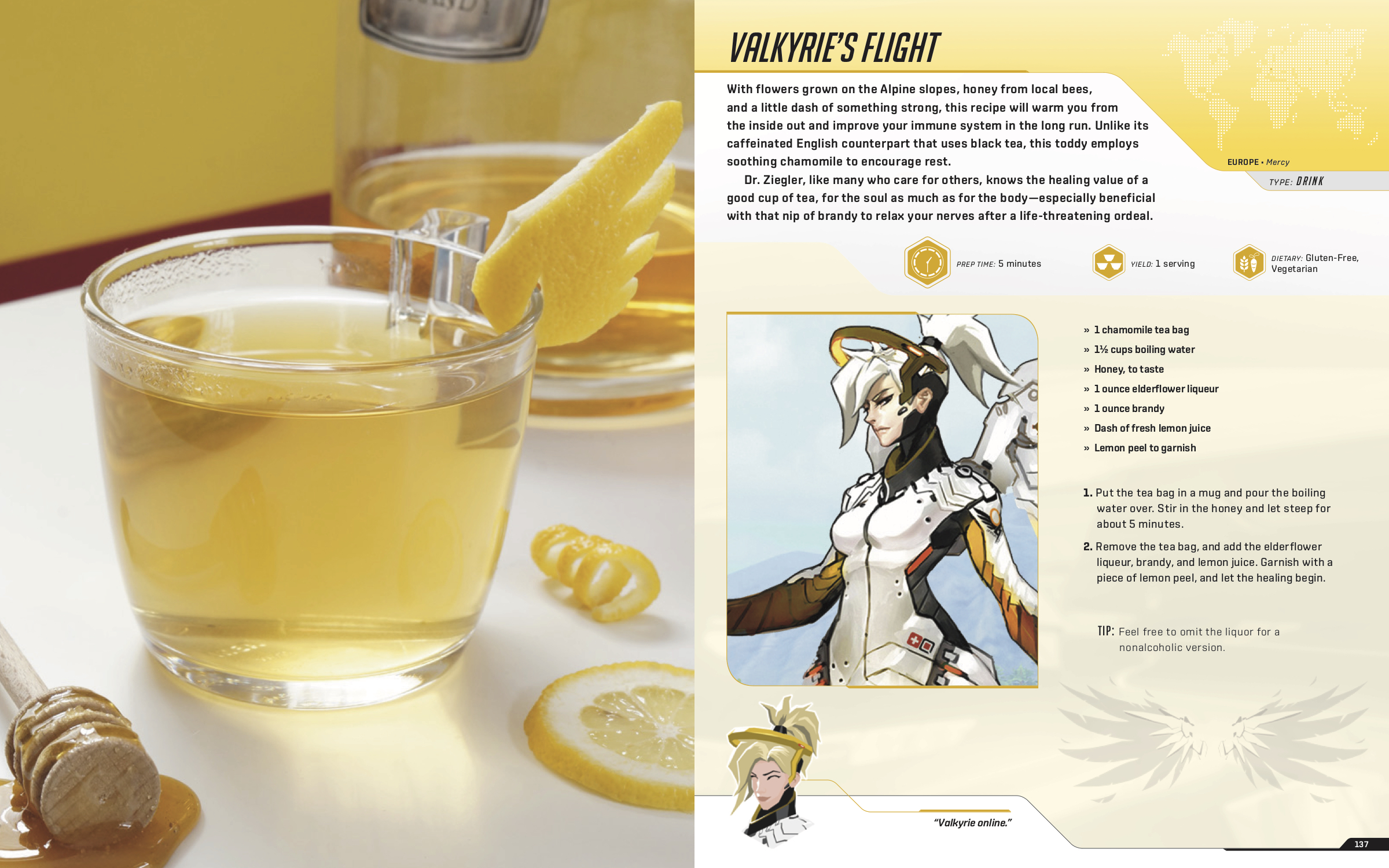 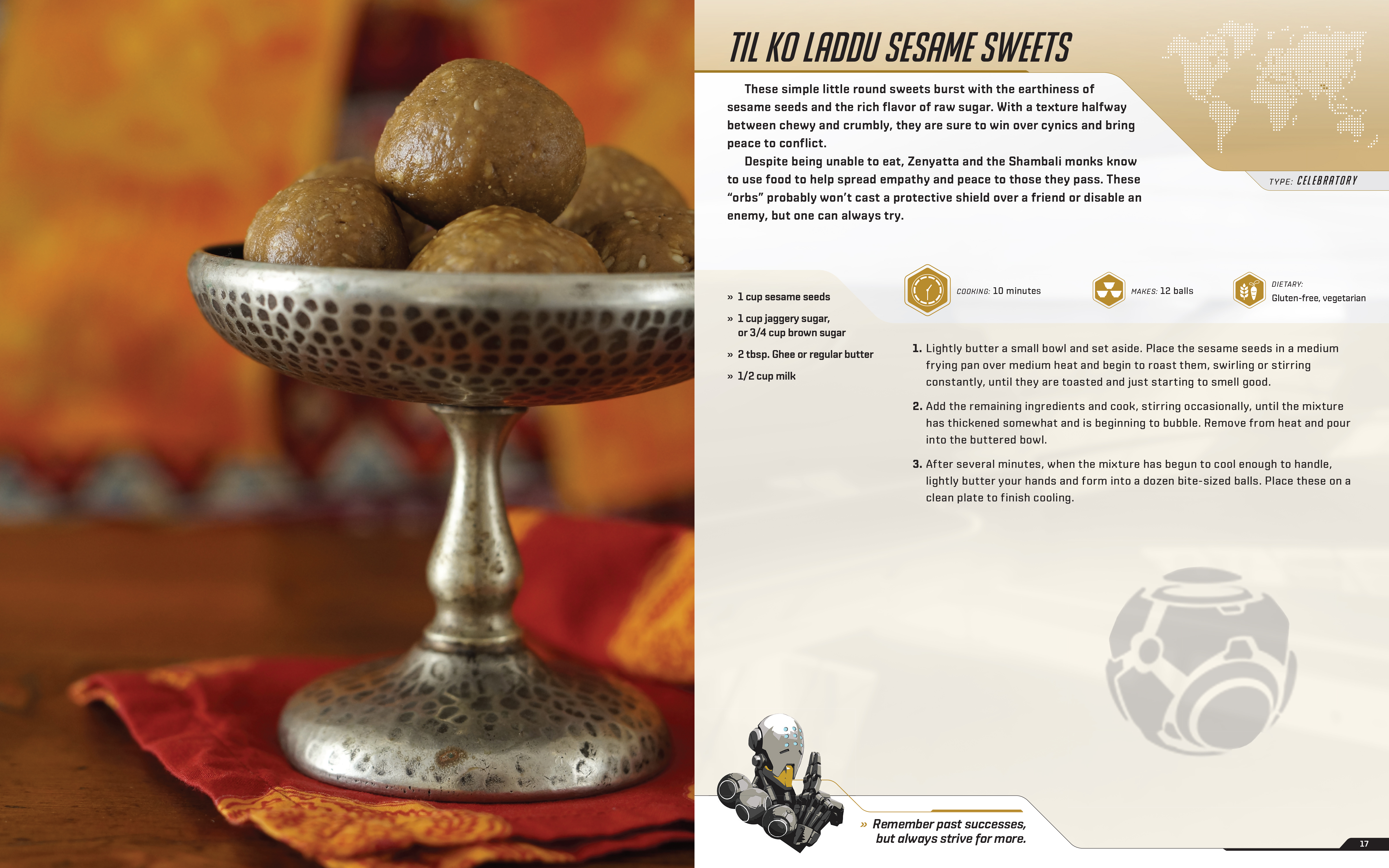 By reading these recipe descriptions, we learn that the order of Shambali monks create food and share it with the humans around them. Roadhog regularly returns to Junkertown, and has connections within the city. Soldier: 76 had a collection of friends on his farm, and had a wholesome and patriotic childhood. Mercy occasionally drinks after a rough day on the job.

All of these things seem insignificant, and its certainly possible to attribute this interest to the fact that Overwatch’s lore is coming out slowly, and in a variety of mediums that cover different characters. Zenyatta fans haven’t received any lore about him since they learned about his situation with Genji; knowing some part of his life can reignite part of the interest they had upon that initial discovery. Fan creations are also focused on smaller, more intimate things than the wide, sweeping portrait of Overwatch’s current lore. Instead of focusing on global politics, fans often focus on smaller situations, like two characters on a mission or one hero’s family life.

It’s also not unprecedented for fans to dig in odd places to find out more info on their favorite heroes. Overwatch lead writer Michael Chu put a long standing fan debate to rest when he casually confirmed the identity of Pharah’s father ... in an interview with Yahoo Sports about a Zarya Easter egg line. When 2018’s Archives event, Retribution, went live, fans checked the official Blizzard store for merchandise descriptions on Blackwatch items.

Even skins can be more than just a cosmetic unlock for some fans. While certain skins always had descriptions denoting that they were a BlizzCon unlock or part of the Origins line, Blizzard has since expanded the amount of skins with descriptions.

For instance, what did Widowmaker do before she married the husband she would eventually kill? What is Mei doing during her current service with Overwatch? The answer to these questions are in skin descriptions.

For some fans, this is an inelegant and frustrating way to find out about something they’re passionate about. For others, it’s exciting to be able to dig for details and flesh out the rest of the world in their own heads. Both kinds of fans will no doubt be eager for new content. With BlizzCon approaching, we’ll see what is next for Overwatch. For now, fans can content themselves with cookbooks, fanfiction, and the community built around the popular shooter.