Just in today, South America’s groupstage of the Regional Qualifiers for TI9 have ended. Out of the 8 teams who competed, only 4 remained to advance in the Playoffs. The teams are; Infamous, Thunder Predator, paiN Gaming, & and EgoBoys.

The former Team Anvorgesa, after the old roster of Infamous disbanded as they exit EPICENTER Major was signed as new roster of the team Infamous. They convincingly top the rankings of the groupstage with a 6-1 score after they only lost one game to Thunder Predator which is the Peruvian team who also proved to be a tough foe in the region as they finished 2nd with a score of 5-2. 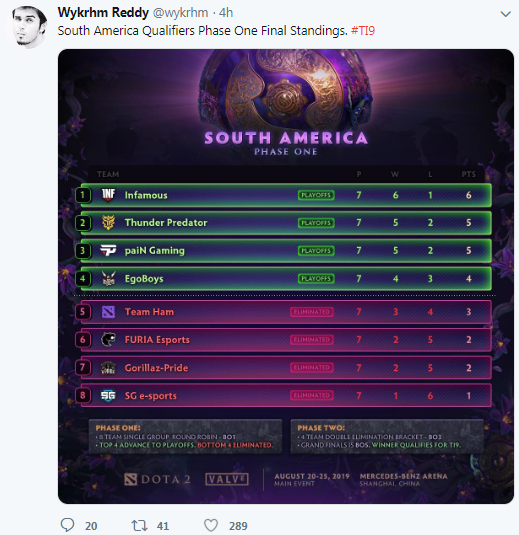 While paiN Gaming didn’t have a smooth gameplay playing in the Peruvian servers where they experienced packet losses, they won those games to finish the same score as TP of 5-2. And the last team to advance is another Peruvian team EgoBoys’. It is Timado’s stack and they managed to advance because of their victories today against Thunder Predator and SG-Esports to come on top of Team Ham (papita’s stack former coach and player of Infamous) failing to equalize the score with EgoBoys after they fell short by 1 point with their loss today against Infamous. Same case for Duster’s stack FURIA Esports, the team was not able to perform well in the groupstages with only 2 points they placed 6th.

This leaves us to the Upper Bracket playoffs. The series will be a bo3 as Infamous will face EgoBoys and Thunder Predator against paiN Gaming. The matches will start 12 hours from now. Stay tuned!

下一篇：Gunnar: Me and my Boys Qualifying for TI9.