Alliance is back, but NiP takes over

Alliance is back, but NiP takes over

After securing an upper bracket playoff run to the grand finals, Alliance sends Ninjas in Pyjamas to the lower bracket only to meet them again in the BO5 Grand Finals, but after five games, NiP clinch the first place and their second Minor win at the Starladder ImbaTV Minor #2 in Kiev, June 16.

In the early game, Alliance showed their aggressiveness as Insania’s Grimstroke drew first blood on 33’s Bristleback with the help of a Fissure block from Taiga’s Earthshaker and Micke’s Troll Warlord. Alliance’s support duo then rotated to help Qojqva’s Queen of Pain and Boxi’s Centaur Warrunner. On tbe other hand, Saksa’s Rubick, Ppd’s Chen, Ace Gyro, and Fata Leshrac tried to take some important kills, but impeccable Fissure blocks and three-man Echo Slams from Taiga helped Troll acquire the items he needed.

Around 30 minutes, the kill score was 9-27 in favor of Alliance as they pushed all NiP’s outer towers and secure the Aegis. As Troll pushes with the rest of Alliance behind him, NiP held their racks after denying their own mid T3, all thanks to a tanky Bristleback with a Halberd and Lotus Orb

41 minutes in, Alliance contests Rosh and after fighting near dire's top shrine. Bristleback and ES buys back to return to the fight. NiP was halfway on finishing Rosh, but Troll just goes in to finish it with the help of QoP and a great block from ES to zone them out.

With this, Alliance pushes mid and bot racks as BB is dead without buyback for two minutes after Boxi jumped on him. As NiP defends top, Rubick and Leshrac die to an Echo from ES, but both bought back instantly, only to be taken down by Alliance together with the rest of NiP as they end game one 14-40, 43k net worth lead, and a 1-0 series all in favor of Alliance.

With a lastpick Qojqva Medusa, Alliance opened game two with a five-man SoD on Taiga Tusk, Insania Winter Wyvern, Boxi Mars, and Micke Weaver as they chase down Ace’s Sven near Radiant bot T2 to secure first blood before the first bounty rune spawned. During the laning phase, Saksa’s pos 4 Batrider, Ppd Undying, Fata Mirana, and 33 Centaur secured counter kills as they quickly respondto lanes where a teammate is being ganked by Alliance.

20 minutes in, Mirana already has Diffusal Blade and MKB after NiP took pick off after pick off from Alliance and proceeded to push bottom T3. On minute 29, NiP successfully took down mid melee and all bottom racks, then they regrouped to wait on Sven’s God Strength to finish mid racks.

As Alliance defends, Saksa Lassos on Medusa followed by a stun from Centaur. Medusa buysback to defend top racks with Wyvern as the rest of Alliance are dead, but NiP proved to be too strong in this map. With a 36-13 kill score in favor of NiP and a 24k gold lead at 31 mins, NiP ties the series 1-1.

After several bad Winter’s Curses on game two, Insania redeemed himself as he took the first three kills of game three as Grimstroke. The trilane of Insania, Micke’s Juggernaut, and Taiga’s Clockwerk dominated Ace’s Ursa and Ppd’s Abaddon in top lane by putting Ink Swell on Jugg or Clock as they walk to NiP before they cast Blade Fury and Battery Assault + Power Cogs. However, NiP took Alliance’s bottom T1 tower and continued pressuring bot after Saksa’s Enigma finished his Helm of the Dominator before minute nine, while Alliance farmed the rest of the map. A five-man push from NiP took down bot T2 and continued their strategy on the top T1 tower after TA finished her Desolator and secured a Rosh.

As Alliance continued to hold high ground, NiP managed to get their needed items to push further mid T3, but Clockwerk lands a two-man Hookshot on Abaddon and Ursa, followed by a Soul Bind from Insania and Boxi’s Monkey King surrounded their tower with his ult. Despite their efforts, NiP took the T3 and killed Clockwerk and Qojqva’s Lone Druid with the help of Enigma’s Blackhole, but a buyback from Taiga trapped three of NiP’s members in his Power Cogs. With this play, Alliance held off their racks and killed TA twice along with Ursa and Enigma.

Clearing up lanes to farm, Alliance managed to give only mid ranged racks, but with TA getting another Aegis, NiP secured mid and bot racks after successful teamfights from them. NiP regrouped and took down T4s, but Alliance managed to hold the throne. After this, NiP decided to clear the top lane, but Alliance’s five-man sod broke their own, yey real casualty was when 33’s Batrider managed to Lasso MK behind the top racks to bring him to the rest of NiP. With that kill, Alliance had no choice but to call gg at 34 mins, giving NiP a 2-1 advantage.

Despite Alliance leading in kills with a Slardar and Grimstroke combo, NiP had the map advantage as they did not lose any of their towers. With the help of 33's LD, NiP took down all of Alliance's T1's before 16 minutes, but Micke's Juggernaut pushed NiP's bottom T2 while NiP is farming. 22 minutes in, both teams fought for Rosh, but after a teamfight and buybacks from Insania and Taiga, Alliance fended off NiP to give Qojqva Storm the Aegis.

As Alliance pushes mid T2, LD’s Bear with Madness and Basher helped NiP take a 3-0 wipe and give Aegis to Ace Anti-mage. However, NiP instantly loss their Aegis after Alliance defended their T2 with a Taiga Buyback, killing Ember, Rubick, and LD in the process, allowing Alliance to secure NiP’s mid racks and force two buybacks.

After successful sod ganks from NiP, well-timed buybacks from Alliance helped defend mid and bot racks as well as get the third and fourth Rosh to give Grimstroke and Slardar the Aghanim’s drop and m Grim saved Alliance from a potential game ender as they managed to kill LD with the help of AM’s illusion from Grimstroke.

With no mid and exposed bot racks, AM and Ember immediately jumped on Grimstroke before Alliance reaches high ground. The rest of NiP follow, but a two-man stun+Epicenter combo from Taiga is followed up by a Storm Spirit Aghs that pulled Abaddon, LD, and Ember with a three-man Electric Vortex. Among the three that Alliance killed with their play, only Abaddon had buyback, but Alliance continued their onslaught and killed the remaining NiP to even the series 2-2

With a last pick Ace Meepo, NiP set the tempo of the game as Saksa Lina and Ace Meepo pressured Qojqva mid Templar Assassin, NiP even managed to get Taiga Earth Spirit, Insania Grimstroke, and Boxi Tiny rotate in mid without killing a single hero from NiP as Ppd Abaddon kept Meepo alive with heals. Meanwhile, 33 Sand King fought it out on top against Micke Void, while Fata Lifestealer farmed at bot.

As NiP chases Alliance near Radiant top Shrine, Void Chronoed the whole NiP except Lina, but they still lost the fight as NiP traded 1 for four behind Meepo’s triple kill. 25 minutes and a Roshan later, NiP already took down most outer towers and top barracks as Lifestealer’s Crimson Guard and Abaddon’s Vlad’s helped Meepo survive. By this time, Meepo already has Treads, Ethereal, Blink, and Skadi.

However, Alliance managed to push out NiP out of their base, Earth Spirit even landed a three-man Magnetize, but there was not enough damage from Alliance to follow up. As NiP attempts the second Rosh, Void Chronoes Meepo, but NiP ensured Meepo’s survival even if both teams already casted their ults. After the Chrono, Meepo got an ultra kill on Void, TA, Tiny, and Grim. Despite Tiny buying back, NiP’s lineup was too strong, and finally forced Alliance to call gg, giving NiP the 3-2 Grand Finals win. 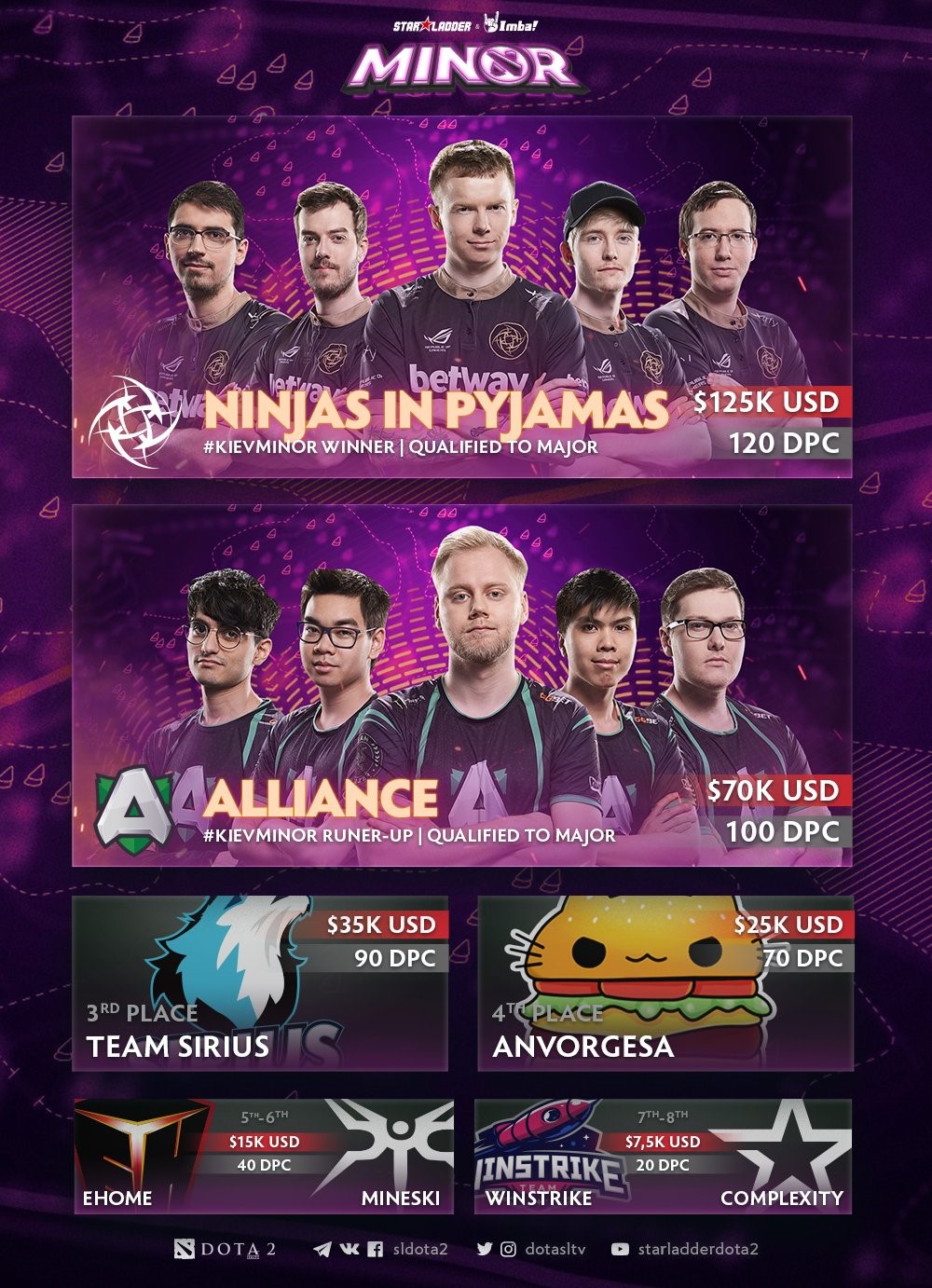 After five intense games, NiP takes $125k USD and 120 DPC points while Alliance takes home $70k USD and 100 DPC points. With the conclusion of this Minor, both Alliance and NiP have secured the remaining two slots for the Epicenter Major.

Despite a lot of upsets in the playoffs, it looks like Alliance and NiP proved themselves to be worthy to join the other teams at Epicenter as they gave us a very great series. Congrats to them and share your thoughts in the comments!

下一篇：NiP claim their second Minor victory of the season