stanislaw recently parted ways with Complexity following a 14-month stint during which the team most notably achieved a top-eight finish at the FACEIT Major in London.

The 25-year-old Canadian player will take the place of his fellow countryman daps, who joined the organization back in December 2016. During his time with NRG, daps and company won IEM Shanghai 2018 and cs_summit 3. In his statement, daps revealed that his current situation is "unclear" and that he is "open to any offers in any field". stanislaw did not spend much time as a free agent

NRG currently occupy the #7 slot in the World Ranking, having achieved a string of 3-4th placements at IEM Sydney, cs_summit 4, and ECS Season 7 Finals.

stanislaw will make his debut in the Americas Minor North America closed qualifier, which is set to kick off on June 12. They will also attend a myriad of offline events in the upcoming weeks, including the ESL Pro League Season 9 Finals, ESL One Cologne, and BLAST Pro Series Los Angeles.

The NRG lineup looks as follows: 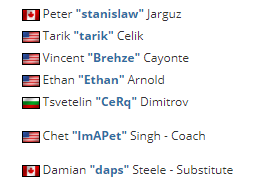