Purge’s piece of advice for increasing your MMR

Purge’s piece of advice for increasing your MMR

Kevin “Purge” Godec is probably one of the best Dota 2 personalities and content creators focused on helping the new Dota 2 players to better their game. His LearnDota series released on his Youtube channel, PurgeGames, his patch analysis and his coaching videos are perfect tools for anyone who just discovered Dota 2.

Although most of his content is created around the idea of teaching the game to others, Purge still receives personal messages and plenty of questions from the Dota 2 players. Most recently, he was messaged by a Herald 6 player who asked for a bit of advice on what he should be doing to increase his ranking. Purge decided to make his answer public, and although he responds to someone who appears to play more mid lane heroes, his advice does cover a lot of other aspects, that can be applied to any role. Here’s a few bullet points from Purge’s answer: 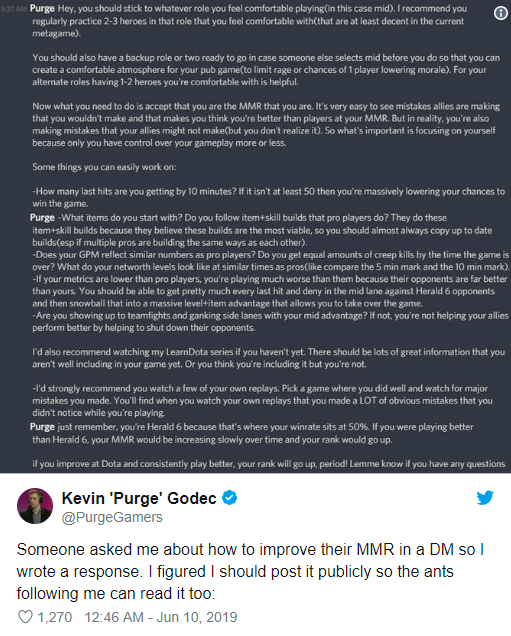 Accept that you are at the MMR you are.

Remember, you are Herald 6 because that’s where your winrate sits, at 50%.

You should stick to whatever role you feel comfortable playing.

Practice 2-3 heroes in that role that you feel comfortable with and that are decent in the current metagame.

You should also have a backup role or two ready to go in case someone else selects the role you want to play (to limit rage or chances of 1 player lowering the team morale).

For your alternate roles, having 1-2 heroes you are comfortable with is helpful.

Focus on yourself because only you have control on your gameplay more or less.

Watch a few of your own replays. Pick a game where you did well and watch for major mistakes you made. You’ll find that you made a LOT of obvious mistakes that you didn’t notice while you were playing.

Things you need to watch for as a mid player

Amount of last hits by the 10-minute mark, if you are below 50, then you massively lowering your chance to win the game.

You should be able to get pretty much every last hit and deny in the mid lane against Herald 6 opponents.

Are you showing up to teamfights and ganking sidelanes with your mid lane advantage? If not, you’re not helping your allies perform better by shutting down their opponents.

Does your GPM reflects similar numbers as pro player?

What items do you start with? Do you follow item and skill builds that pro players do?

We hope this is helpful for all of you, mid players or not, and that the next time we will be talking about how to break into the Divine ranks!