Team Sirius change up their roster prior to the Minor

Team Sirius change up their roster prior to the Minor

With only a week to go until the start of the final Minor of the Dota 2 Pro Circuit season, Team Sirius have made a change to their lineup.

Team Sirius only formed a little over a month ago, being one of the three ‘sister squads’ in the Aster organization; Team Aster, Sirius and Aster.Aquarius. The team have not yet had any major main stage events, having only participated in qualifiers for EPICENTER and the StarLadder ImbaTV Dota 2 Minor Season 2. While missing out on the Major by quite a bit, they managed to secure the second spot for the Chinese region at the Minor which begins in exactly one week from today. With that in mind, the team have decided to replace their offlaner. 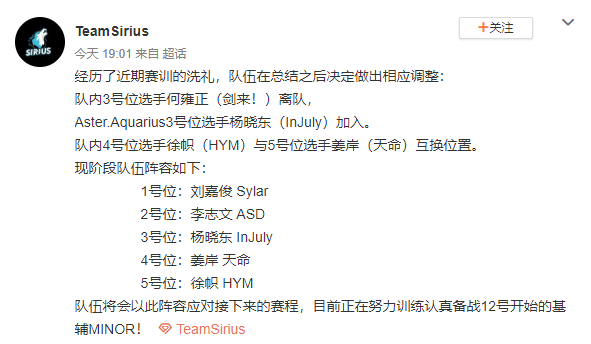 In a post made on their Weibo, Team Sirius confirmed that they would be removing He ‘Inflame’ Yongzheng from their lineup and bringing in Yang ‘Injuly’ Xiaodong. Prior to this announcement being made, Injuly was a part of the Team Aster organization, playing for their sister squad, Aster.Aquarius. The other change within the roster that was included in the post was the position swap between the position 4 and 5 players.

The full Team Sirius squad that will be playing at the upcoming StarLadder ImbaTV Dota 2 Minor Season 2 is:

This squad will make their first appearance at a DPC event next week and while the team is filled with seasoned veterans of the game, it will be an uphill battle for them if they have hopes to make it to the Major.

下一篇：Fng on ESL One Birmingham results: “There was no clear favourite”