A Minor of hopes and shattered dreams approaches

A Minor of hopes and shattered dreams approaches

With just over a week to go until the final Minor of the Dota 2 Pro Circuit season kicks off, there are a few teams participating in the Starladder ImbaTV Dota 2 Minor that have hopes and dreams of reaching EPICENTER and maybe qualifying for The International 2019 via DPC points – so I’ve decided to take a look at who might get through to the Major.

Alliance have recently begun to look like a promising squad once again in recent times, with huge potential but unable to convert it into anything real in the DPC. After a stellar performance through the previous Minor, the team fell apart in the end, losing to both EHOME and Ninjas in Pyjamas and ended in third place. However, going into the recent ESL One Birmingham 2019 event, we hoped to see more from Alliance once again – but, even after a magnificent trouncing of PSG.LGD, Alliance never showed any other promising results, and were eliminated subsequently. 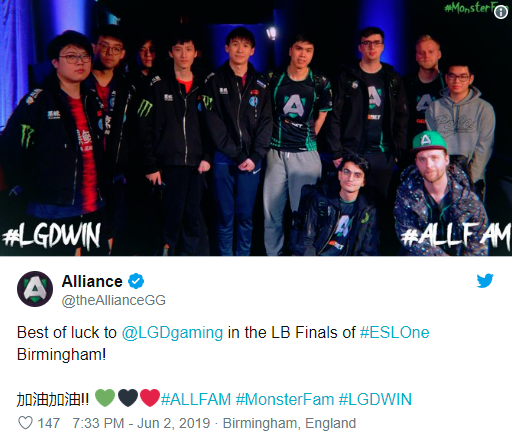 Going into the Minor, Alliance will need to drastically improve on their recent form – especially with a massive array of teams that are hungry for some time in a Major. With TI3 winner Jonathan ‘Loda’ Berg as a coach, you can expect the team to definitely bring their A-game, but will that be enough to carry them through to EPICENTER and subsequently finish in the top three? It’s a tall order for any team – but maybe we will see some surprises along the way.

Mineski’s Dota 2 season has been far from what we have come to expect from the SEA squad – although having been hit with a lot of roster problems, the team have been unable to show many great performances. ESL One Mumbai 2019 was a major boost for the squad with a second place finish but following that, they slumped again in Paris for the Major. The upcoming Minor will be a huge test for Mineski, especially with Fnatic and TNC Predator performing having undoubtedly better season’s.

The field for the Minor is a lot tougher than Mumbai was, but with the return of Tang ‘71’ Wenyi to their side as coach, they have the potential to make their way to the top and even challenge some of the bigger teams at the Major. But it’s a long road ahead of them and if TI9 qualification is left to regional qualifiers, there will be a whole host of obstacles in their way – such as the up-and-coming BOOM ID squad.

EHOME – a comeback in the making

EHOME’s season has been both amazing and terrible at times – with roster issues and player injuries taking their toll on the Chinese squad. With a second place finish at the previous Minor, EHOME will be hoping to keep up that performance moving forward – and maybe even get another shot to take on NiP this time round. From all the StarLadder ImbaTV Dota 2 Minor season 2 teams, EHOME are the closest to obtaining a direct invite to TI9 – but they still have some ways to go.

The team is definitely still struggling to find their footing after the OGA Dota Pit Minor, but they will be hoping that they can edge past the high tier of Minor contenders and maybe make an impact at EPICENTER too. Unlike the teams mentioned before, EHOME only require a top four finish should they make it to the Major – and possibly less if the likes of Keen Gaming and OG reach the point tally before them.

These are only three of the eight teams at the upcoming StarLadder ImbaTV Dota 2 Minor Season 2 and while NiP have already secured their TI9 invite, every team attending this Minor has a rather significant chance to make it to the Major and possibly cause some upsets. With 7.22 still fresh in the hands of the pro players, there may be some drafts or picks that these teams can pull out that will blow away even the best of teams – but we will have to wait to find out.

The Minor kicks off next week Wednesday from the Cybersport Arena in Kiev, Ukraine and with it being the final one of the season, we’re expecting an absolutely amazing spectacle from everyone involved. We’re sure to hear the announcements of the tournament format as well as talent and groups as the week goes by, so stay tuned.