Team Secret are the unstoppable ESL One Birmingham 2019 champions

Team Secret are the unstoppable ESL One Birmingham 2019 champions

The grand finals of ESL One Birmingham 2019 were upon us and after Team Secret managed to defeat PSG.LGD in the lower bracket final, they booked their spot against Evil Geniuses and a magnificent series of Dota 2 action.

The two teams had met many times recently, with Secret always coming off the better – especially in their current form. However, after breaking their “third place curse” it was clear that EG were an entirely different team, looking stronger than they have before. Going into the first game of the best of five series, we saw both teams throwing everything that they had at one another. While Secret looked set for a quick victory, EG would mount a spectacular defense as they managed to turn the tides – but it was not enough as Secret closed things out. 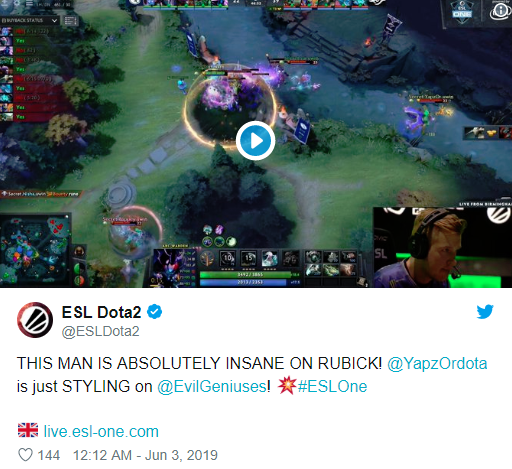 EG were not about to give up and in the next game they showed their dominance as they controlled the map from start to finish, never allowing Secret a window into the game. With a tied series, it would be Secret to strike again and take the series lead – with an epic Enigma from Yazied ‘YapzOr’ Jaradat. 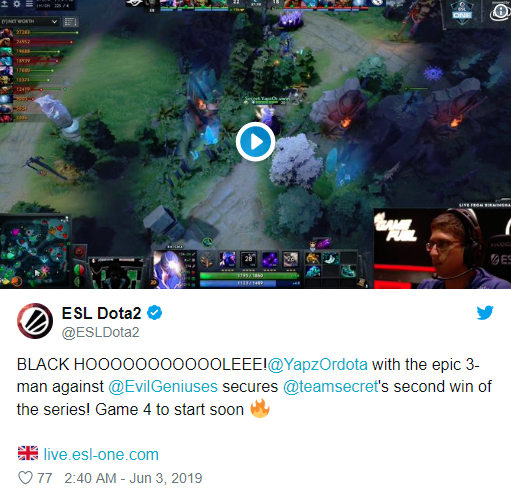 Now on series and championship point, Secret were ready to close out ESL One Birmingham in style but EG were not about to give them the luxury of this. For a third game in a row, the IO picking team would find themselves falling to defeat as EG played a near-perfect game, allowing their opponents to only rack up six total kills.

The final and decisive game of the series was an all-out bloodbath, with neither team wanting to back down. The lead swung back and forth for the entire 40-minutes but in the end it was the Major champions, the team known for destroying all in their path at ESL One events, Team Secret, who came out on top. Absolutely stunning plays from the entire team but especially Yapzor, took them to their win.

With ESL One Birmingham 2019 now over, we look towards the StarLadder ImbaTV Dota 2 Minor followed by the EPICENTER Major, all just a short time away.