Another chapter in the WePlay! Tug of War trilogy ended today. The Asia and Americas Tug of War: Dire tournaments have come to a close and two more teams booked a spot for the final act which will be held sometime in July with eight teams fighting for the lion’s share of $300,000.

Six Chinese and six SEA teams battled against each other for the spoils in the Asia bracket. Royal Never Give Up (RNG) were one of the four to receive a tier one invite to the competition and were seeded straight into the quarterfinals. So were Mineski, Power of MYSG+AU and EHOME, but surprisingly enough, Mineski lost 1-2 to EVOS Esports, MYSG+AU got defeated by Neon Esports, while EHOME lost 0-2 to Invictus Gaming. The results are worrisome for both EHOME and Mineski who are expected in less than two weeks to fight in the final Minor of the season for a shot at making it to the EPICENTER Major.

RNG are already qualified to the Major and their performance over the last few days in the Tug of War: Dire Asia only confirms their surge. The grand finals this morning went 3-0 in the way of RNG, who executed Neon Esports in about one hour and a half. Du “Monet” Peng carrying the team on Chaos Knight, Weaver and Drow Ranger was voted by the community the Most Valuable Player and took home $5,000 for his performance. 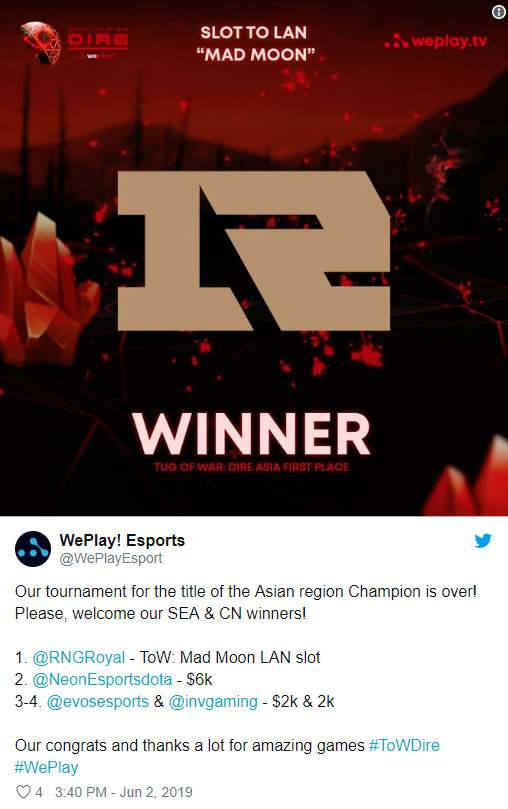 American competition had a bit of controversy. Seeded in the quarterfinals here were Infamous, paiN Gaming, J.Storm and Beastcoast and the conflict appeared in the semifinals where paiN and Infamous were meant to go head to head for a spot in the grand finals. paiN have a full Brazilian roster while Infamous now feature four European players on their team, which seems to create a lot of animosity in the SA scene. Infamous’ captain Mariano “Papita” Caneda spoke pretty openly only a few days back about the adversity his team deals with, as most of the SA organization refuse to scrim against them or when they do, they leak scrimmage information to other teams in their attempt to boycott the European players moved to Peru. The conflict seems to have escalated to the point where paiN refused to use a coin toss to determine on which sever their series against Infamous should be played. paiN Gaming ended up being late to the lobby and received a def loss, which sent Infamous to the grand finals.

J.Storm were the other grand finalists, after taking down Beastcoast 2-1. Just very recently re-shuffled, J.Storm lost to Infamous and will sit out the WePlay! Mad Moon LAN tournament as well. Although defeated, J.Storm’s carry Roman “Resolut1on” Fominok was voted the tournament MVP and took a complimentary $5,000 prize. 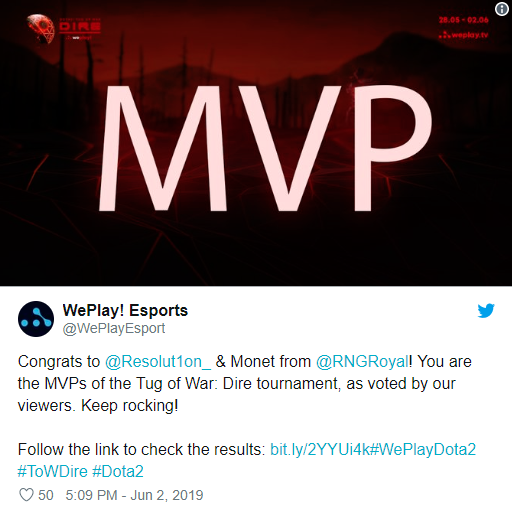 WePlay! Mad Moon is the third and final act in the Tug of War trilogy. Three teams qualified through the online competitions and five more will join them via direct invites. The LAN event will feature a GSL best-of-three group stage leading into a double elimination bracket. The winner of each group will advance straight into the semi-finals of the playoffs while the bottom-placed team in each group will be eliminated. Besides the $300,000 prize pool, the tournament will also give a $10,000 prize for the MVP, but the contest is split into two categories: best core and best support player. The audience gets to vote for the winner in each category.

More details regarding the directly invited teams and the tournament schedule are to be announced soon.

Royal Never Give Up (Tug of War: Dire Asia winners)