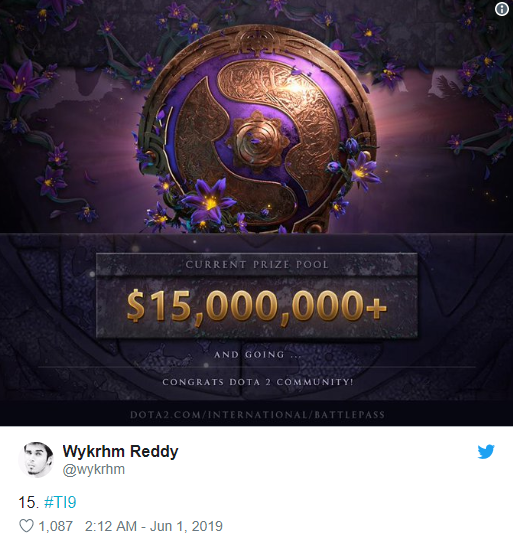 Twenty-five percent from each Battle Pass purchase or Battle Pass points booster goes straight into The International prize pool, and so far the community contributed with about three million Dollars more than they did it last year after the first 23 days of the Battle Pass release.

Valve added so far only the first Immortal Treasure in the Battle Pass and released the Earthshaker Arcana, which becomes available at level 365. Valve’s creativity for this year surpassed the community expectations and perhaps the several new exclusive sets that open at high levels play an extremely important part in the continuous growth of the prize pool. The Young Invoker Persona, Acolyte of the Lost Arts exclusive item set is available at level 305 and along with the Axe Unleashed, Exclusive Bare Knuckle available at level 425, they seem to have done wonders so far. There are still plenty of features to be released for the 2019 Battle Pass owners, including a new in-game event, titled Wrath of the Mo’Rokai.

There are nearly three months for the community to set a new record this year. The International 2019 main event will be held August 20-25 in Shanghai, China at the Mercedes-Benz Arena.

下一篇：Gambit deliver the first upset on the Arena Birmingham stage