“Imagine a workshop mode where every hero has a ‘baby dva’ that jumps out after they die (and can re-suit into their original character),” Jake said on Twitter.

Well, one a day later, DarwinStreams (also known as the Workshop guy) delivered. “Something fun I made just this morning after Jake’s tweet,” he wrote on Reddit. “It’s pretty much the exact opposite of a recently popular “Dva kinder surprise” mode. When you’re 1 hp you get “demeched” as a pilot, which is Tracer for all heroes. Then you can farm your ult and get your “mech” back by using it.” 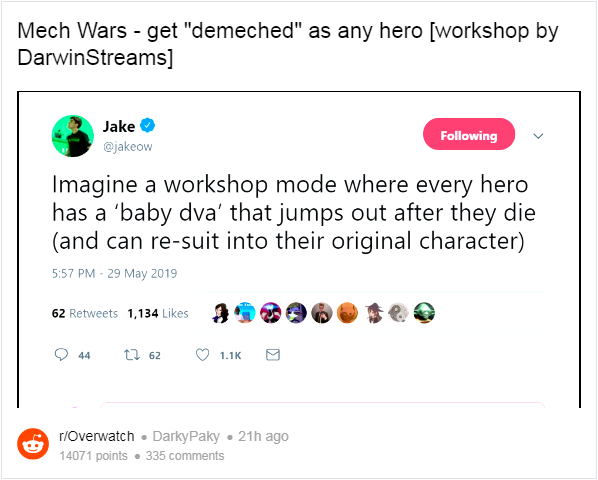 And that’s just it. Mech Wars is simple, but it has a certain charm to it. Instead of transforming into a tiny “baby D.Va” with a little gun that barely chips away at your target’s health bar, you turn into a fully-fledged Tracer.

You don’t have to play as D.Va if you don’t want to, either. You can be anyone you want—even Tracer. A fight that would normally last seconds is automatically an all-out brawl in Mech Wars. Combine mechanical skill with clutch potential and it should come easy to you.

Use code 9VP1P to try the game mode out for yourself.