The Florida Mayhem’s massive roster changes continue with the release of DPS Damon “Apply” Conti. Apply was added to the main roster of the Florida Mayhem before the beginning of the Overwatch League’s second season.

Apply was a longtime member of Mayhem Academy, Florida Mayhem’s North American Overwatch Contenders academy team. He was given a two-way contract before the second season, which allowed him to play in both Overwatch League and Contenders. Mayhem Academy recently announced their decision to step out of Contenders for the remainder of 2019, citing a need to “retool” their roster. 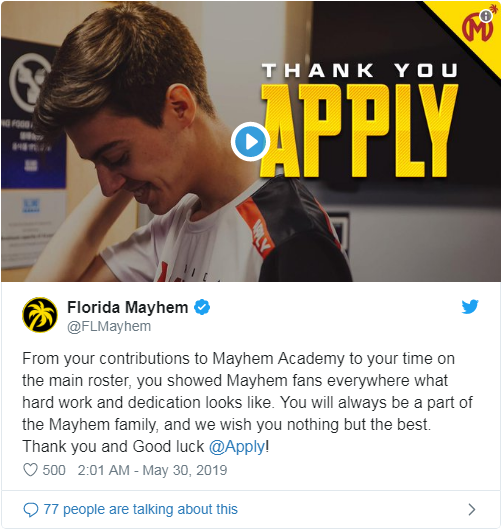 “I’m definitely going to miss the people that I met in Mayhem, especially the Academy team,” Apply said in a video posted on Twitter. His Mayhem Academy teammate, Jo “HaGoPeun” Hyeon-woo, remains on the Florida Mayhem roster. Two other Mayhem Academy teammates, Johannes “Shax” Nielsen and Russell “FCTFCTN” Campbell, were traded to the Los Angeles Valiant earlier this month.

Shax, FCTFCTN, and Florida Mayhem off-tank Caleb “McGravy” McGarvey were part of a multi-player deal with the Valiant to obtain Koo “Fate” Pan-seung for the Florida Mayhem. Apply’s release is the latest in a long line of roster changes from the Florida Mayhem as the team converts to an all-Korean roster and coaching staff.

“My number one goal in Overwatch was to reach OWL stage and now, my next goal is to definitely stay consistently on the stage,” Apply said in his goodbye video. He has yet to announce his future plans. The Florida Mayhem’s next game is against the Seoul Dynasty at 7:45pm CT on June 6.