EU's giant Team Secret had a solid run in MDL Disneyland® Paris Major, for Day 1 they had a convincing statement of 4-0 coming on top of Empire and Chaos in the groupstages which easily led them to the upper brackets. 2 days later they are on the mainstage having fought Liquid in the first round they are victorious after three games. After that, day by day they have battled OG, EG, and in the Grand Finals with a 4 game marathon defeating Team Liquid. 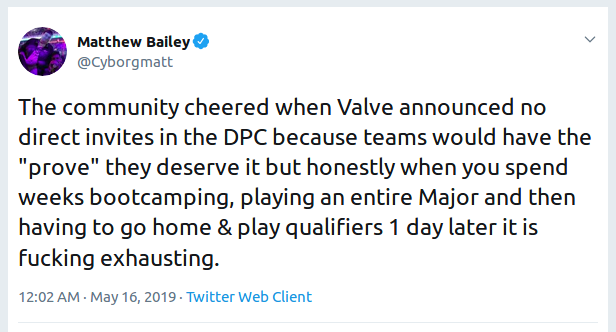 Apparently after MDL Disneyland® Paris Major, qualifiers for the Europe region in Epicenter Major was about to start 3 days later, it couldn't been more exhausting for them. In ways of mental and physical aspect that players and coaches expend during pro competitive matches and even before that was alot of boot camp training is too much for the high tier teams. In my perspective, this is the result of the imbalance of Dota's competetitive scene.

This has been stressed out in the recent past by different teams and casters who experience the same situations and with this hectic schedule of Valve's current Major System which have been for quite some time now, It may cause for these teams to withdraw or unable to play/travel for the sake of their physical and mental health. Teams like Virtus Pro, Evil Geniuses and even Team Secret themselves have done in the past due to scheduling conflicts.

If anything, in Valve's big Major tournaments like this we want to see these teams we root for to play in their perfect condition so they can play comfortably and deliver a strong performance. With a light into this topic may Valve be able to change something in this system to something inclined with the players and everyone involve in this tournaments.