Valve had just released the battle pass just 6 days ago and the prize pool for the biggest tournament of e-Sports of all time just hit a record breaker. By just 2 hours of release we already had a staggering 2 million dollar pool. That would just mean 8 million just got in to valve's bank in a short time frame. Currently we already have 11 million which is alot bigger compared to the 9 million we had last year. Looking at this rate, we most likely will pass the pool with last year of 25M. 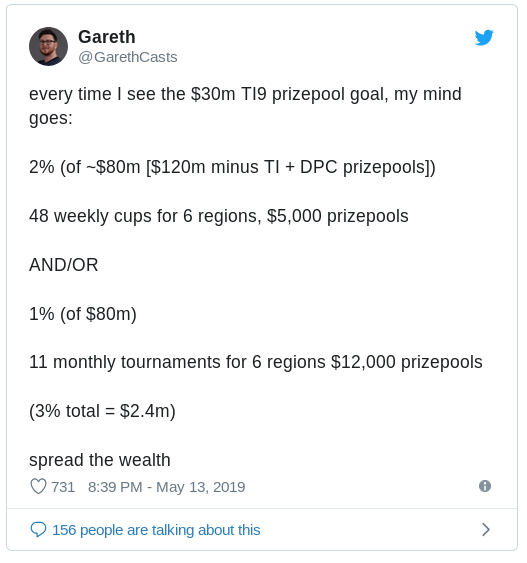 We may not stress this enough but what's killing the scene for this young teams is that they have to pay off electricity bills, facilities or maybe the rent for their bootcamp adding to that they may even spend the same time training as the pros do and earn so little they can not continue. Which is why it is most likely a gamble entering a scene where you could never know where you will end up. Gareth speaks up a quite simple way to fund this. A little of 2% of the prize pool or 1% will be able to produce a good amount of battle cups and/or tournaments for them which Gareth stated would suffice 11 monthly tournaments for all the 6 regions.

Let's say that the The International 2019 would have a 30M prize pool which means Valve has 120M in its pocket. Alotting atleast 1% (1.2M) and/or 2%(2.4) of that prize will be a huge game changer. Not only this will help the low tier scene but it will also open up for new players and boost their confidence in entering the competitive scene.

As a long time lurker and watcher of Dota 2 I think every once in a while someone had this slipping up their mind... Low tier teams are mostly people who have dedicated most of their time to make of dota as a career and with so little space there is in the pro competitive scene for new and young teams, they are given little hope for this. Let's all voice out so Valve can hear us and maybe we can help this people and the game we all love.