WePlay are determined to become a true competitor in the Doat 2 scene. They already ran multiple online tournaments for CS:GO and Artifact, while their Dota 2 activity dates for a few years now. However, the organization went through a lot of restructuring and it has new goals and new ideas about how events should look like. With that in mind, WePlay launched at the beginning of the year a Tug of War Dota 2 three parts tournament.

It was Ninjas in Pyjamas who won the Tug of War: Radiant online event held at the end of February with $50,000 prize pool on the line. The victory also came with a direct invite to the final show, which will be a LAN event with a $300,000 prize pool.

Eight teams will travel to the final LAN battle, WePlay! Tug of War: Mad Moon. The tournament will be held sometime in July but no details about the location or specific dates we revealed yet. NiP is one of the eight teams set to participate. Two more squads will join them via online battles in the Tug of War: Dire Asia and Tug of War: Dire America with five more being directly invited by the organizers. 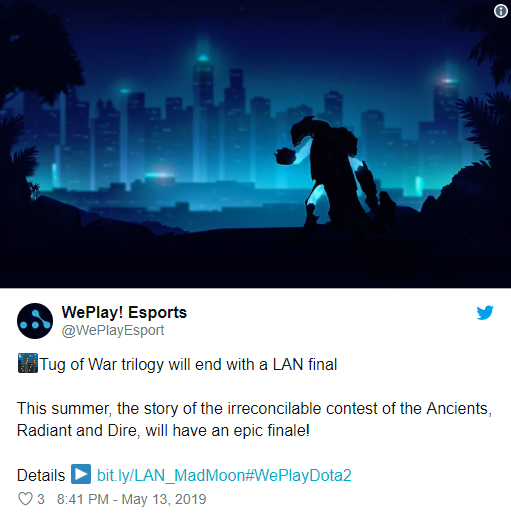 WePlay! Tug of War: Mad Moon will feature a GSL, best-of-three group stage leading into a double elimination bracket. The winner of each group will advance straight into the semi-finals of the playoffs while the bottom-placed team in each group will be eliminated. Besides the $300,000 prize pool, the tournament will also give a $10,000 prize for the MVP, but the contest is split into two categories: best core and best support player. The audience will vote for the winner in each category.

More details regarding the directly invited teams and the tournament schedule are to be announced soon so, stay tuned!