The playoff stage of MDL Disneyland® Paris begun earlier today and after the upper bracket ended for the day, it was time to say goodbye to the first two teams at the Major as the best-of-one elimination matchups begun.

A North American Dota 2 clash was first on the cards as compLexity Gaming took on Beastcoast (ex-TEAM TEAM). It was an oddly close game in the early period as coL shutdown BC initially but then allowed them a ton of space and then obliged by making their way back into the game. It was only near half an hour that a clear leader was seen when the teams met in a Roshan pit brawl – and coL cleaned up their opponents with ease.

From that point on, coL meticulously took down their opponent’s and their barracks – leaving their base and tournament hopes in tatters. BC attempted to hold on but coL was too strong and forced out the GG. The loss means that Beastcoast end their MDL Disneyland® Paris run in dead-last while compLexity Gaming go forward to face PSG.LGD in the next round of the tournament’s lower bracket. 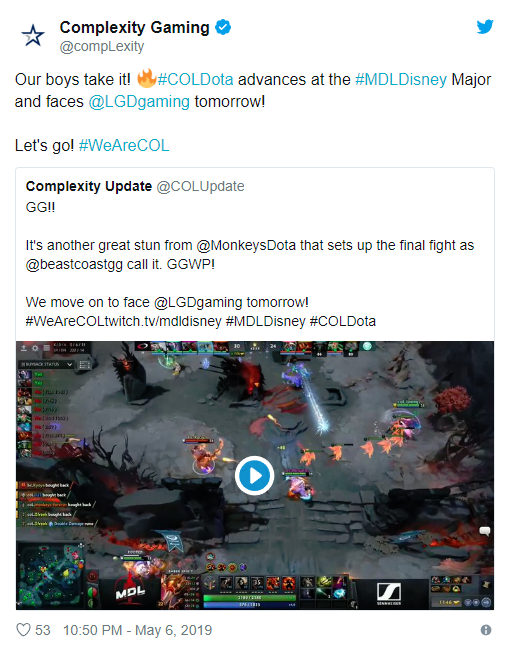 The second elimination match of the day was between Mineski and Team Empire. Mineski were definitely considered to have an advantage going into the game, having recently played amazingly in Mumbai. Empire opened the game on the front foot, finding great openings to take a few kills but Mineski did not let that last for too long. By 20-minutes the Southeast Asians were in full control and marched onto the high ground.

There was nothing that Empire could do as Mineski tore through their base and claimed the victory. Mineski now move on in the lower bracket and their next opponent will be Virtus.pro, while Team Empire exit the MDL Disneyland® Paris Major.