Micke is back, but Madara stays for a little longer with Alliance

Micke is back, but Madara stays for a little longer with Alliance

Coming from the OGA Dota PIT Minor with a third-place finish, Alliance released an update on their roster. The Swedish organization had to use a stand-in through last month to allow their carry player to fully recover from an arm injury.

Back in 2017 Michael “Micke” Vu was diagnosed with neurogenic thoracic outlet syndrome (NTOS) and had to power through a long recovery period. More recently, Micke experienced pain and loss of muscle control in the hand which forced him to take a medical leave in order to properly heal and recover.

Omar “Madara” Dabachach was brought to the Alliance house and played with the team for the MDL MDL Disneyland® Paris Major, the OGA Dota PIT Minor qualifiers and ESL One Birmingham 2019 qualifiers. Alliance traveled with Madara to Split, Croatia to play in the Minor and will continue to use him for the event in the United Kingdom, however, at ESL One, Madara will switch to the mid lane.

“We couldn’t have asked for a better stand-in. We would like to thank Madara for his spectacular performance during his time with us so far,” team coach and Alliance CEO Jonathan “Loda” Berg said.

Micke is now ready to rejoin his team, but before the final set of Major and Minor qualifiers of this season, Maximilian “qojqva” Bröcker will take a medical leave to “undergo a routine surgery,” which will keep him away from the computer for a few weeks. According to Alliance’s announcement, qojqva won’t make the travel to ESL One Birmingham and will not play in the EPICENTER Major qualifiers. 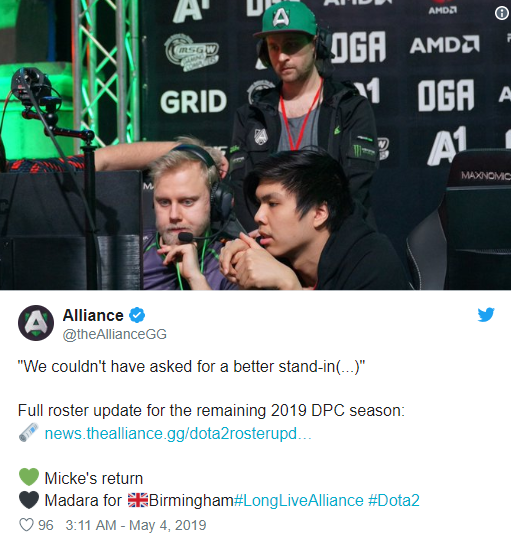 Alliance current roster from position 1 to 5: