Mineski’s second place finish at the recent ESL One Mumbai 2019 has been a clear resurgence from the Southeast Asian squad and with that, they have decided to bring back their old coach.

Once a massively feared powerhouse in the Dota 2 scene, Mineski have fallen off quite a bit in more recent times – failing to really have much showing beyond the SEA events. But with their fantastic finish in Mumbai, it seems that they are ready to challenge once more as they bring back the coach that helped them to their Dota 2 Asia Championship title, Tang ’71’ Wenyi.

71 is a fairly well-known coach in the Dota 2 scene, having been there at the very first TI event as a coach to the EHOME squad which placed second to Natus Vincere. Since then he has also had a coaching role at Team DK, before ending up with Mineski in early 2018. After joining the squad he assisted them in claiming the SEA’s first ever Major victory with DAC 2018 before departing in late 2018 – only to return now, when the team seem primed to shine once more. 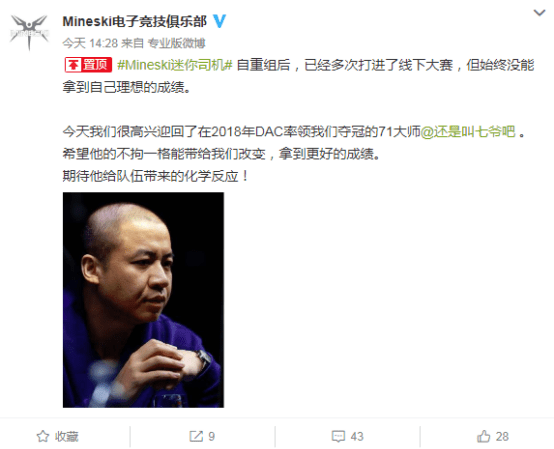 Mineski confirmed the coaching change with the above post via their Weibo account. The post speaks about the team’s recent lackluster performances at LAN events but continues on to encourage the chemistry which 71 will bring to the squad.

It will be interesting to see if Mineski can make a valiant showing without Kim ‘Febby’ Yong-min at the upcoming MDL Disneyland Paris Major with the return of their old coach.