We are 2 months away from the final major and DPC event before the TI9 Qualifiers begin, so teams all over the world are hoping to snag as much DPC points just to avoid the excruciating yet stressful qualifiers.

However, with so many teams blooming across every single region, EPICENTER found it impossible to decide which region to give an extra slot to. As a result, instead of the usual 3 slots for EU, China and CIS, these regions only get 2 slots instead. *laughs in EU qualifiers*

But this sprouted a new problem. Which region deserves the remaining 3 slots? Every region (including SEA, NA and SA) are given 2 slots already, so this leaves to 3 extra slots. EPICENTER decided to throw the matter to Valve to decide instead, saying due to uncertainty in communication with Valve too. 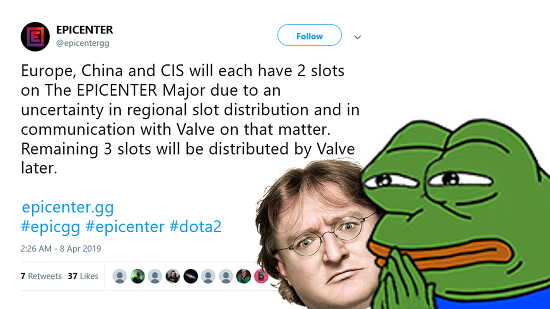 Name a more iconic duo. Well, before we get into that, the rules set by Valve last year for the new season was as clear as water really. It was stated that in each major, at least 2 slots much be given to each region but didn’t mention a limit. So technically, you could just give the other 3 slots to one specific region but hey, let’s not spark another chaos since Kuku’s ban.

So, back to the question, there’s always rumors about Valve secretly favored the NA region after all, Valve HQ is at Washington DC, NA. And just last year, Valve gave 3 regional slots to NA for the International. It was Evil Geniuses, Optic Gaming (ppd & zai) and J.Storm (Resolution).

However, let’s not just flame Valve for that since TI8 was one hell of a qualifier for NA. With EG taking in s4 and Fly, they needed to play the qualifiers and Optic Gaming being a huge powerhouse having both Zai and PPD. So, it was a no-brainer that both teams are guaranteed to take 2 slots already, leaving none for the fresh teams.

It was also probably the reason why Valve gave NA 3 slots for the sake of nurturing the NA scene. However, it’s 2k19 and NA region couldn’t be any worse. Without EG, NA wouldn’t have a representative that would even stand a chance at making it to top 3 in majors, which might lead to no NA teams getting direct invites to TI. That’s not a great thing to see if you’re in the NA Dota community. Now I’m not implying that NA is guaranteed to get 3 slots though, after all look at the current state of NA, so the most likely option if I was a rational Valve employee would be to give it to more competitive regions aka tougher regions that matter.

For instance, EU has more than 4 teams that could have made it to the major but NIP was left out despite being one of the stronger teams compared to NA’s TEAM TEAM who actually made it to the Paris major. NIP wasn’t the only team that looked promising, there’s also Alliance and The Final Tribe that have several worthy old players in it. The same goes to China.

China has the most pro players in the region and despite many of them like EHOME and Newbee being possible candidates for the major, they were limited and that’s for a major that has 3 slots. Imagine reducing a slot on any of these regions would be a harsh move.

However, looking at how things would go, I would predict that China and EU gets 3 slots as usual while NA gets the 3 slot as well (they usually only get 2 in past majors).

So, most of you are probably from SEA, so which region do you think deserves the extra slots? Do SEA have that many tier-1 teams that deserve to play in majors or is giving 3 slots to China and EU a great idea? Tell us in the comments! Stay tuned!

下一篇：Black^ to stand in for Infamous