In early December 2018, Carlo ‘Kuku’ Palad announced that he would be taking a short amount of personal leave from TNC Predator. The reasons behind this were linked to the massive drama that blew up in the Dota 2 world last year surrounding a few teams and players. The team would find a replacement for the time being, but without Kuku, TNC seemed to fall slightly – until now. 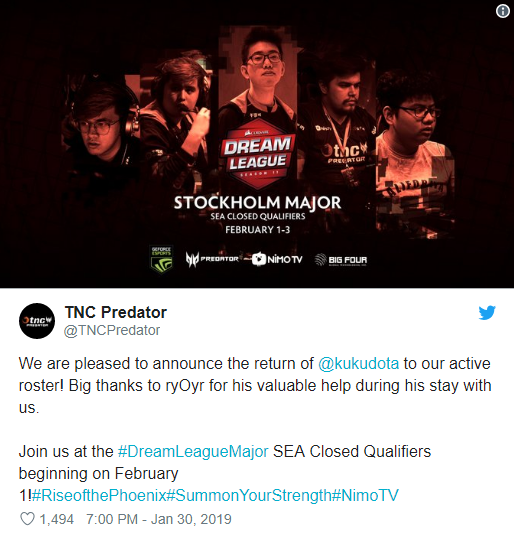 Nearly a full 2-months after his decision to take a break, and with the culmination of The Chongqing Major too, Kuku has triumphantly returned to the Southeast Asian squad. Announced just a short time ago via their Twitter account, TNC Predator confirmed that their standin, Ryo ‘ryOyr’ Hasegawa would be leaving the squad and Kuku would be returning to his position on the team. This announcement comes just one day before TNC begin their DreamLeague Season 11 Closed Qualifier for the SEA region as well as after the team were confirmed for ESL One Mumbai 2019’s Closed Qualifier too.

The SEA Closed Qualifiers for what has been dubbed “The Stockholm Major” begin on February 1st 2019 and will see 8 teams from the region fighting it out for 2 spots in the main tournament. While the actual main tournament is only set for mid-March, TNC will still have their work cut out going up against the rest of the SEA powerhouses such as Fnatic and Mineski.

It will surely be a tough undertaking to return back to their prestigious form where they left of last year, but if it were possible for any team, it would be TNC Predator. Either way, we look forward to seeing them in action in a few days – hopefully playing some of their best Dota 2 once again. You can find out more about TNC’s upcoming events as well at the next Major by following the links below.