The Dota 2 patch 7.21 is out and it is no secret that it has brought with it a host of changes. VPEsports has already gone through the game play and item changes and how they will affect the meta. But what remains, and is probably the most critical part, is the heroes. Buffs and nerfs are flying all over the place making some heroes literally the heroes or winners of Dota 2 7.21 while others that have been nerfed are destined to be the losers. We take a look at the biggest winners and losers of Dota 2 7.21.

Remember the first Major of the season, the Kuala Lumpur Major? Arc Warden wreaked havoc in that event and just as patch 7.20 was released, he was forgotten. PA became the star of the new patch and Arc Warden wasn’t looked at a lot. Also the hero takes some time to come online and with a faced paces meta, he lost some credibility. But Arc Warden was still a strong hero and with the buffs from patch 7.21, he’s only going to get stronger. Add to that the fact that the games will probably be longer with the changes IceFrog has made, and it seems Arc Warden may just rise to popularity again.

The prominent changes that will make the most difference are the increased duration for the Tempest Double and the additional attack speed. The duration is increase is applied to all levels so it pretty much starts coming into effect at level 6!

Another hero who was very popular pre 7.20 and has fallen from grace since then. The changes in Dota 7.21 may actually prompt Bane players to get a couple of levels in the skill early on. Enfeeble also adds negative status resistance so with the additional 1 second to Fiends Grip, and Enfeebled target will be gripped for a long, long time. At level 7, with a level 4 Enfeeble, Bane can Fiend’s Grip a hero for 9.6 seconds! Considering the fact that trilanes are back in business, early Enfeeble can also play a big part in winning lanes. Prevent enemies from farming with the attack speed reduction and add to stun durations of your allies.

* Batrider: Firefly duration reduced from 18 to 15

* Batrider: Firefly cooldown reduced from 40 to 34

The speed bonus to Firefly has to be one of the biggest buffs of the Dota 2 7.21 patch. Batriders usually start with Boots of Speed. With a base movement speed of 290, Boots bring the movement speed up to 330. At level 3, when Batrider has a level 2 Firefly, 7% moovement speed is added, which takes him up to 351. A movement speed of 351 in lane, at level 3 while setting things on fire does not seem like a bad deal. Batrider has been missing from the meta for a long time and this might be the first step to bring him back. An aggressive trilane with either a position 3 or position 4 Batrider is something worth trying.

The Spawn Spiderlings talent gives Brood a 355 damage nuke at level 10, with a cooldown of only 8 seconds. The talents at level 25 make the spiderlings seem like the spiders from the Frostivius. Brood was one of the top picks at TI8 and was even first picked in a lot of games. The changes from patch 7.21 won’t make her that strong to make her first pick material, but in the right situation, Brood is a very strong hero and teams will be on the lookout for those situations.

How much do they need to buff CK before teams realize it’s a good option?! I feel we have a Clinkz situation happening here, where Clinkz was buffed for a long time and he came up as a terror at TI8. CK is also one of the heroes with a movement speed of 320 or more (320 in CKs case). A 1-1-1 build in lanes should give CK a lot of kill potential. With Chaos Strike only having a cooldown of 4 seconds at level 1, a target is bound to come in the way of at least two of those if CK is chasing. Again, maybe he wasn’t the best for 7.20 with the meta being fast paced, but with Dota 2 7.21, the meta will slow down a bit making space for CK. On top of everything, his natural nemesis, Medusa seems to be in pretty bad shape and should see her pick rate go down, which makes Chaos Knight even more viable.

* Io: Tether now transfers health and mana even when Io is at max hp/mp

* Io: Overcharge now has an 18 second cooldown and an 8 second duration. No longer has a 2 second toggle.

* Io: Relocate is now cast delay again instead of channeling (being interrupted, silenced, rooted, etc will cancel the ability)

For the professional circuit, removal of Io from Captains Mode is a important change. Literally every tournament, more than 90% of the games have Io either picked or banned (mostly banned). Removal of Io is bound to give teams (mostly the team with second pick) an extra ban.

But coming to the changes, it seems like Io has been blessed with a a lot of good stuff in Dota 2 7.21. You can transfer HP and mana even when you haven’t lost any means Io can just tether to a dying enemy and use consumables on itself. Overcharge not costing health and mana per second is also an advantageous change, I’d say. the attack bonus for Overcharge has doubled and damage reduction has gone up as well. I mean, it kind of seems ridiculous but a hero that was always good has just gotten better. The cherry on top of the cake is Relocate is now again a cast delay and not a channeling spell. The Wisp lurk in the trees, start Relocate and Tether to an ally in danger at the last moment to get him/her out of peril. When Io does come back to the Captains Mode, the contest rate will go even than what it was, if that’s even possible. 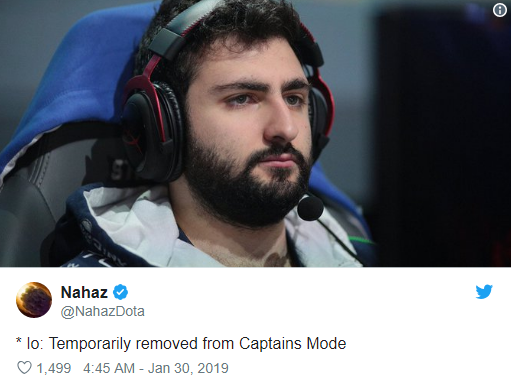 Lion was the recipient of a lot of buffs in 7.20, but wasn’t used too much. The most we saw of that hero was Virtus Pro picking him up for Solo. He is, or rather was, at the tipping point of being a regular pick and I have feeling this might do it. The case range talent is perfect for a support Lion as the hero has four targetable abilities. An additional GPM of +120 is already very high at level 15, now it’s +150. Position 4 might actually be the best position for Lion now, in the hands of a player like Yapzor who has farm priority and can get to those high levels quickly.

* Nature’s Prophet: Using tango on a sprout tree will 2x regen (like eating a branch tree)

NP is a hard hitter. Always has been, but even more so since his agi gain was taken up to 3.3 in the 7.20 patch. We have seen core Furion’s been played in professional Dota, most recently SUmaiL playing the hero in the mid lane. The 2x regen with sprout makes him a better mid laner now, as the three Tangos are basically pretty much like having six of them. There is just ample regen in lane. For a core NP, +40 attack speed will be preferred to the 25% cooldown reduction, but if that talent is taken, it will bring down Sprout to 6, Teleportation to 15, Nature’s Call to 27.25 and Wrath of Nature to 45. Maybe players won’t feel a need to go the no cooldown on Teleportation talent with this.

After reading the 7.20 patch notes, it seemed like NS would make a comeback after being slaughtered in terms of nerfs right before The International 2018. But surprisingly, it wasn’t the case. Now NS has the Scepter effect pretty much from the first night, which is 5 minutes into the game. It’s a nit like Anti-Mage, Aghanim’s Scepter is removed and the effect is added into an ability. The increased attack speed and the lifesteal talent makes NS a viable core. In the past, we have seen S4 play a mid night stalker. Any chance something like that comes back now? It’s not impossible!

Any hero that gets +90 GPM at level 10 is a good candidate for a support. That is like getting a ward and 15 gold every minute. The strength gain increase is not very high (5 extra strength over the course of 25 levels), but it doesn’t hurt in any way. The 8% spell amplification talent is good now doubt, but +90 GPM at level 10 is too good to pass. Also, no one really plays an Ethereal-Dagon Nyx in professional games. Let me rephrase that: No one goes that build if they are sensible.

Omniknight’s new skill, Heavenly Grace, with the status resistance does not seem to have gone down well with players. But the improved version of it should definitely do so! It’s a 10 second duration skill, which is huge in the first place. The added strength can be read as Heavenly Grace now provides 140/280/420/560. That is a lot of bonus HP. And don’t forget, each point of strength provides 0.08% magic resistance. So Heavenly Grace basically provides 50% status resistance, 560 HP and 2.28% additional magic resistance for 10 seconds (add to that 28 damage for strength heroes). Putting it on a hero like Huskar, who wants to run at you from the start of the game is a scary prospect. Just on the basis of this skill, Omniknight should make a comeback into the meta.

The damage block for Living Armor was quite impressive already, before the buff from 7.21. At level 4, there are seven instances of 100 damage block. You don’t need to be a math wizard to realize it has the potential to block 700 damage (has to be from different instances though, something like Lion’s Finger will just undergo 100 damage block and the rest of the damage will be dealt). Before 6.75, Overgrowth did damage the enemy until it was taken away. Nice to have it back, even though it is only with a Scepter. A lot of points to be made now for Treant’s Scepter.

* Warlock: Base strength increased by 2

The last time Warlock received a buff was 7.14, so a long time ago. Warlock is a decently tanky hero with a strength gain of 3 (more than his intelligence gain). The additional strength should make him more durable in lane, either dishing out damage or babysitting the safelane carry. As far as the Golem is concerned, it now has more damage and attacks faster. If you weren’t scared of it till now, this probably is a good time to start.

In patch 7.14, WD’s Maledict cooldown was changed from 20 at each level to 50/40/30/20. The change in patch 7.21 brings us back to square one. That change kind of destroyed him because Maledict is a lane winning skill and a high cooldown early on makes the hero a lot worse in the laning stages. This change should bring Witch Doctor back into consideration for the next portion of the DPC season.

Two heroes I would have liked to see get more of a buff were Bristleback and Lifestealer. Maybe next patch will be the one for them.

Coming to the losers, it is a list of heroes that have been powerful for the last few months and picked a lot. None of the nerfs totally get rid of any hero, but like the update mentioned, it is a balance update aimed at bringing in more parity to the picks. The following heroes will probably see their pick rate go down a bit:

The DreamLeague Season 11 qualifiers will be where Dota 2 7.21 will actually be put to test. That will give us a better idea of who actually is good and who will be find it tough to make it to the drafting screen.

下一篇：Can AdmiralBulldog go Pro again? Find out Why, thanks to the new patch.