Daxak Interview: I was a pretty good pub player

Daxak Interview: I was a pretty good pub player

Gambit Esports took the spoils yesterday in Group A at the Bucharest Minor. The Russian team that delivered only surprises since their formation at the beginning of the Dota Pro Circuit season, dropped just one game yesterday and made it to the Minor playoffs upper bracket after an impressive performance throughout the whole day.

VPEsports had the chance to catch with Gambit’s carry Nikita “Daxak” Kuzmin upon his team arrival in Bucharest. The interview was conducted on the eve of the Bucharest Minor start and we were curious to find out more about who Daxak is, how he got signed by Gambit, what did he do before playing Dota 2 and who inspired him to take this path in life.

Hello Nikita and welcome to Bucharest, before I go into asking you a few things about the Minor here, expectations and meta, I’d like to start by talking a bit about you, career decisions and what made you play this game. I heard that in your teenage years you were a pretty good Rugby player, so tell me about that. How, when did you start playing rugby, how far did you get with it and why the switch to Dota 2?

I won’t say I was very successful. Yeah, I was playing on several Moscow Cups, but I wasn’t enjoying it. I never pictured myself as a professional Rugby player. That was something that my parents actually pushed me to do. You know, they basically wanted me to stay away from the computer as much as possible so they sent me to Rugby.

Do you know that the Romanian scene also has a Dota 2 professional who trained from young ages to become a rugby player? Can you guess who is he?

No, I don’t have any idea. I know a few pros from Romania; Ar1se, canceL, B0ne7, but I can’t imagine which one of them played Rugby.

Ar1se is the one. Was your family supportive when you decided to have an esports career?

No, not really. They never understood me.

Did they change their mind a little after you got signed by Gambit?

As a matter of fact, yeah, they are more understanding now that I have a salary. They started to realize that this can be something like a profession.

Do they watch your games?

Yes, they do, but I don’t think they understand too much of what’s going on on the screen.

I also know that you are a big fan of Sci-Fi literature. Do you still have time to read as much as you would like since you became a Dota 2 pro?

I was reading a LOT when I was younger. I kind of stopped reading that much like five, six years ago. To be perfectly honest, I was reading a lot of Sci-Fi books because every summer my parents were sending me for the entire summer vacation time to my relatives on the countryside where there was no internet, no computer, nothing for me to do, but to read.

I hear you. I suppose you have some favorite book or favorite author you discovered back then so, let’s make an exchange, give me a Sci-Fi book recommendation and I’ll give you one.

My recommendation would be Kurt Vonnegut – Welcome to the Monkey House, which is actually a collection of short novels. What other hobbies do you have, or better asked do you have time for hobbies?

When I decided that I want to become a pro, I kind of stopped doing anything else. I realized that I have to sacrifice a few things in my life to achieve my goal. I even stopped playing any other computer game. Right now I’m dedicating all my time to Dota 2.

Then what do you do when you want to relax a bit, to release the stress, the tension at the end of a long day of practice?

I just put my headset on and go for a long walk with music in my ears. Sometimes I’m just watching a movie.

You are fairly new to the competitive scene, tell me how did you end up at Gambit back in the spring of 2017?

I was a pretty good pub player, but with a bad reputation and I think they had no other choices but taking me. That’s actually something normal in the CIS scene, to not have a choice when you want to swap a player. I was bad back then, I know it, but nowadays I think I’m pretty good. I was a flamer and all the bad stuff you know about pub players. Then I went for a year to the Russian army and I realized what have I done wrong in my life. I had to change something and I did that. 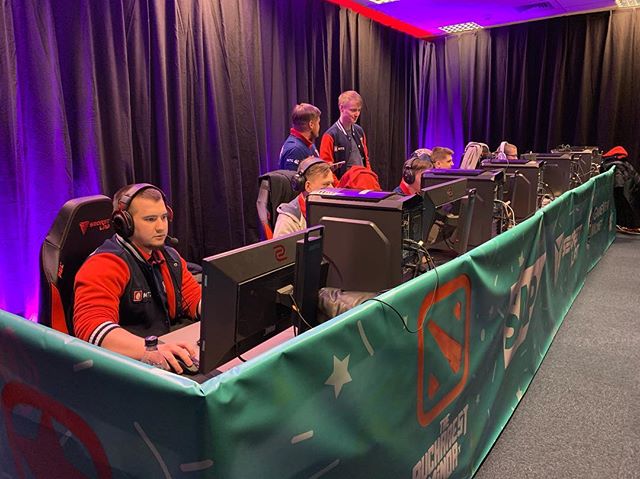 I’m pretty sure you watched a lot of Dota before becoming a pro. Who was the player from back then who inspired you to take this path?

The player who inspired me to sacrifice everything to become who I am now is Ramzess, but if you ask who is the best carry right now, I don’t know if it’s still him. The problem with the carry players is that each and everyone of the high profile players have their own strengths but everyone shines more in a different patch, or in a different meta if you want. If someone is regarded at a point as the best carry of the moment, it doesn’t mean he won’t be eclipsed by somebody else the next month.

And who do you see as the most threatening carry here, at the Bucharest Minor?

I don’t know. It has to be one of the two Chinese carry players

Earlier today you saw the group drawings. You guys are going to play against NiP, Team Team and Keen Gaming, are you happy with your group?

What expectations do you have from the group stage alone, not talking about the Minor overall result because I’m pretty sure you want to win it.

Well, when we were at the Kuala Lumpur Major, I expected us to make it to the top 6 out of the 16 teams and yeah, we were no way near to that. So, I don’t know what to expect this time. I want us to make it to the upper bracket for the playoffs and we will see how it goes from there.

I’ve done a bit of research before we meet and I noticed that you played quite a lot of Visage games in pubs recently. Is Visage coming back in the core position?

It’s just that I can play this hero, so, why not practicing it? I can play Visage just like I can play Meepo, and I showed it to OG a few days ago in the grand finals of the WePlay tournament.

Are you happy with how the meta is right now? I’m asking this because after TI everyone was complaining about how small the carry hero pool is. We had a big patch with many small updates following it since then, and I want to hear your opinion if anything has really changed for you as a carry.

Oh yeah, the patch really changed that situation where you had no other option than either first ban or first pick Phantom Assassin. Basically, this is all that happened not far than a month or two months ago. Now we have about 10 heroes we can think of during the draft which I think it’s pretty good.

Is there any duo combo that you find rather overpowered? For instance, right after Grimstroke was added to the Captains Mode we had a lot of the Grimstroke – Lich being favored in professional games.

I’d say Visage-Tusk is pretty powerful right now, it can beat everything. The Team Tag spell is kind of overpowered.

We reached the end of our interview, if you have any shout-outs to make please do.

下一篇：ImbaTV Leak Info on the Third Minor of the Season